A more peaceful Galley Cove after the Council and local people finished cleaning it up on Monday. 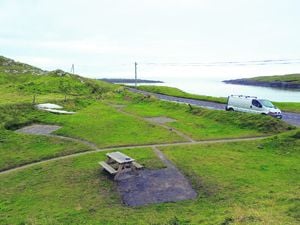 A more peaceful Galley Cove after the Council and local people finished cleaning it up on Monday.

‘WE knew there was going to be an influx because it had gone out on Facebook that hundreds of youths would be converging on Crookhaven for the Regatta Festival,’ said a local woman this week.

The woman, who runs a business locally, told The Southern Star that everyone in the village had effectively been tipped off and chose to stay away from the regatta celebrations on Friday and Saturday night.

She said local business people, particularly the hard-pressed publicans, had to take on extra staff to man the doors to prevent underage people from buying alcohol.

But even without the sale of alcohol locally, the teenagers came well supplied and their makeshift campsite at Galley Cove, which is a mile-and-a-half from the village, told its own story.

She said the beach – which was cleaned up by locals and Cork County Council on Sunday and Monday morning – had been left in a disgusting condition, and that the area around it had been used as ‘a toilet.’

Dermot O’Sullivan, who owns O’Sullivan’s Bar on the pier, described the teenagers as ‘disrespectful and intimidating’ and said they had effectively ‘ruined the weekend of Crookhaven Regatta.’ Mr O’Sullivan said he is not prone to exaggeration, but on this occasion Crookhaven was ‘invaded by about 150 teenagers, who frightened away people, particularly families, who come to enjoy the regatta each year. ‘The vast majority of these teenagers we had never seen before. They were first time visitors and I sincerely hope it will be the last time we seen them.’

Mr O’Sullivan said he ‘had a word’ with the teenagers’ parents when they came to collect them. ‘I said I believed that individually they were all very nice people, but collectively they were a disgrace to themselves, their families, and their schools.

‘There was no great amount of badness on display during the weekend,’ he added, ‘just a collective, intimidating crowd that had no regard for the people of Crookhaven, or the amount of rubbish they left behind.’

Gardai are investigating claims that a young girl was sexually assaulted over the weekend, and a fire extinguisher was thrown into a caravan where special needs children were sleeping. Blackout blinds inside prevented the extinguisher from doing any damage, but it was distressing for the family, particularly the two children, one of whom has Down syndrome and the other who is on the autistic spectrum.

Although there was not a huge amount of material damage caused in the village itself, the local woman who spoke to The Southern Star said: ‘It will be a long time before we get over the level of disrespect shown to the people of Crookhaven last weekend.’

But it appears some of the youths engaged in the weekend drinking spree are unrepentant. One youth on Twitter rather ominously said: ‘Can’t wait to set fire to everything in Crook next year.’