The Barryroe well off the Old Head of Kinsale 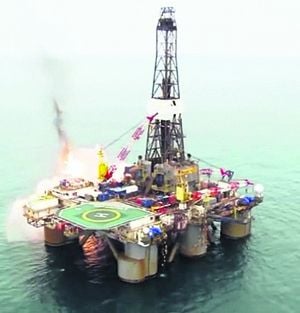 The Barryroe well off the Old Head of Kinsale

EXPLORAITON company Providence Resources has moved to quell any fears arising from a fall in its share price, by saying plans for its Barryroe oilfield off the Old Head of Kinsale are progressing.

In a statement issued last week, it said it ‘notes’ the recent fall in share price, but is not aware of any specific reason for this decline.

It added that it ‘continues to focus on the delivery of its long-term, Irish-centric strategy, including the Barryroe farm-out process.’

The Barryroe oilfield has been hailed as one of North West Europe’s largest oil resources, with a potential to produce 1bn-1.6bn barrels of oil.

The Providence share price reached a peak of €8.85 in Dublin in 2012 but has since fallen, and languished around the 21c mark this week.

But the current falling oil price is not good news for any of the world’s exploration firms.

Brent crude, the benchmark for more than half the world’s oil, has slumped in the last year, as OPEC refrains from trimming output amid a global glut, while US production has surged, according to Bloomberg.

Oil prices dropped to almost a barrel in New York last week, adding to the pressure on exploration companies.

Speaking of Barryroe in 2012, Providence chief executive Tony O’Reilly Jnr said: ‘It’s a very big field’, adding that the discovery was ‘very good news’ for the Irish economy. ‘We hope this will not be a single project. From an Irish perspective, here we have no oil industry. This really heralds the beginning of that industry,’ he said.