THE Mizen peninsula experienced a number of power outages on Wednesday as Storm Rachel was due to hit in West Cork. 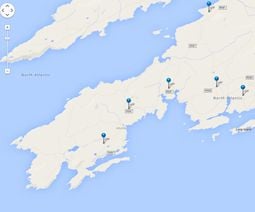 The ESB map showing the location of the power outages in Mizen today. For updates see www.powercheck.ie

THE Mizen peninsula is experiencing a number of power outages as Storm Rachel prepares to hit West Cork.

From early morning, the ESB were reporting power faults at a number of locations in the area, including Goleen, Schull and outside Durrus.

According to the ESB’s interactive site ‘powercheck.ie’ almost 300 customers were affected by the outages, and the faults occurred between the hours of 4am and 9am, and are currently ongoing.

The ESB’s Twitter site is warning customers of the impending storm – Storm Rachel, due to hit Ireland Wednesday afternoon and night. They have advised customers to have their phones charged up in the event they may need to report faults.

While the storm is likely to bring high winds and rain, the current power outages are more likely to have come about as a result of two strong lightning storms which hit the area at 9pm Tuesday night and again at 4am on Wednesday.