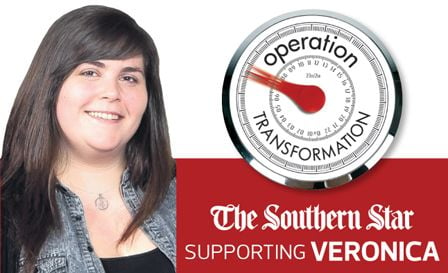 TIRED but happy from a long day’s photo shoot, Veronica Horgan was a bit bashful about telling The Southern Star that she and the other Operation Transformation leaders are going to be featured on the front cover of the RTÉ Guide.

‘Between filming the show, other TV appearances – including The Today Show and Brendan O’Connor’s show – as well as interviews, and now this,’ Veronica said, ‘I am feeling a bit exposed, but it’s all good.’

The 24-year old leader, who was born in Italy but moved to Dunmanway with her family at the age of four, and now lives and works in Clonakilty, is, by her own admission, ‘wrecked.’

She said: ‘It has been all go, non-stop. You hear people speak about being on a rollercoaster, but that is exactly what it is like with almost every hour scheduled to the last! Having said that – with just two weeks left to go – I am oh so happy that I got the opportunity to do all this.

‘Aside from the very obvious benefits of losing weight and getting fit, I have found the whole experience to be amazing. I got to meet people I would never have had the opportunity to meet before, including the Tanaiste Joan Burton, who was in Dunmanway last Friday.

‘We got to visit St Mary’s Primary School, where I was educated from the age of four to ten; and she was also given a tour of the Community Garden, which is run in conjunction with the Dunmanway Resource Centre, a voluntary organisation that my parents, Maria and Charlie, are heavily involved in; and I even got to plant a cherry tree in the garden, to raise awareness of this wonderful project.

‘From start to finish,’ Veronica said, ‘the Operation Transformation programme has been a total game changer. I will be looking back on it with fondness and nostalgia.’