PRODUCERS of a short film set to be shot in Beara are asking locals for help ahead of filming in early March.

The film, Guinness & Coke, follows the story of a young boy named Oscar who travels to a new part of Ireland with his father every weekend.

It is based on an anecdote from director and Corkman Lochlainn McKenna’s own childhood, and is almost entirely autobiographical.

Originally hailing from Cork city, he told The Southern Star that the West Cork scenery left his ‘jaw on the ground’ when searching for locations.

‘I drove the bones of the Wild Atlantic Way and travelled to a lot of the islands along the west coast and met so many wonderful people, but at the end of the day, Cork is home and Beara is special,’ he said. 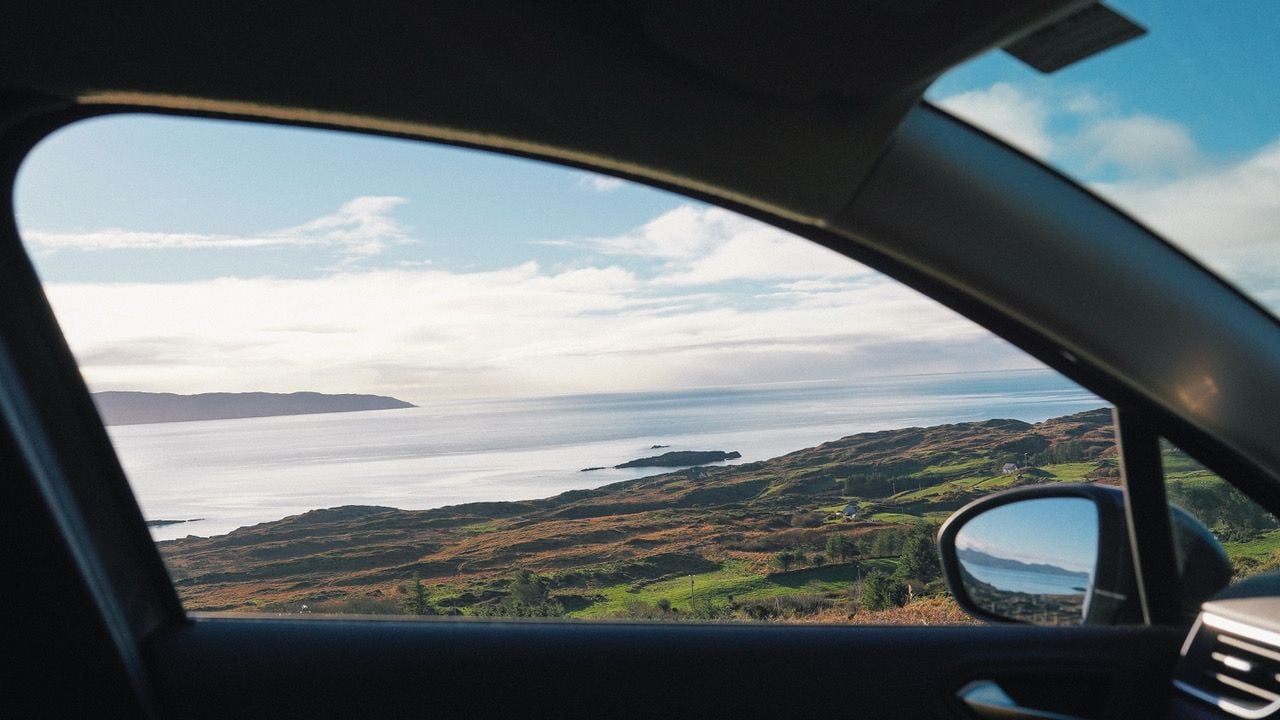 A 'recce' photo taken while searching for locations on the Beara peninsula. (Photo: Lochlainn McKenna)

‘There’s obviously been plenty of successful films made here in the past from Ondine to Float Like A Butterfly and that’s something we’d like to continue despite our film being a bit smaller at this stage! West Cork is a truly magical place with a huge amount of untapped potential.’

The production team behind the film, Heritage, are no strangers to West Cork either, having been founded in Skibbereen in 2017.

One of their first projects was with Fields in Skibbereen, and since then they have gone on to shoot multiple projects in West Cork and beyond — including a high-profile music video for Burna Boy and Ed Sheeran, which has gone on to amass over 70 million views on YouTube.

Gráinne Dwyer, ceo of Heritage, said that West Cork is a special place to shoot. 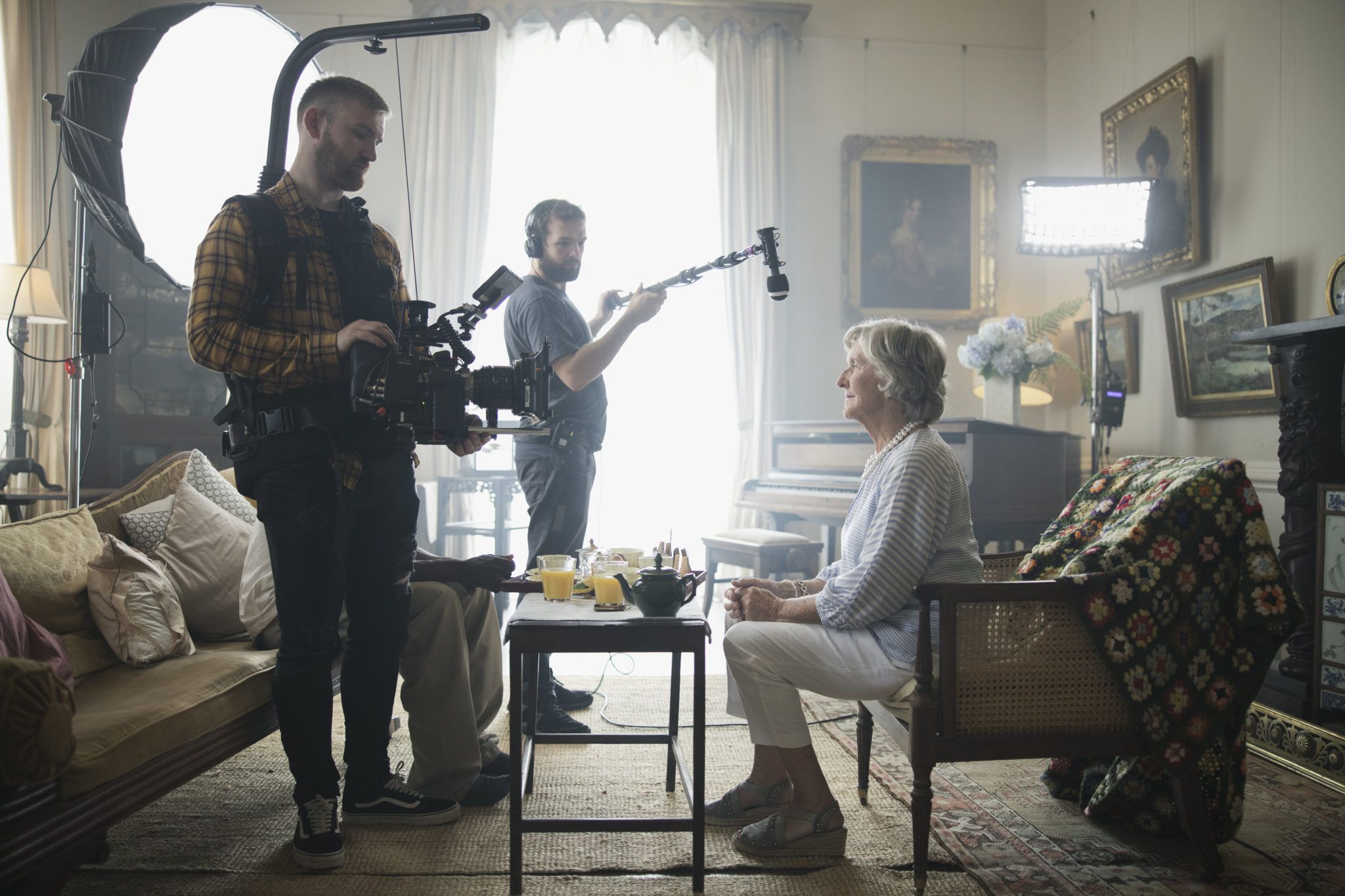 Behind the scenes during the filming of Yellow Bird, a previous project from Hertiage filmed in Castletownshend. (Photo: Michael McCarthy)

‘We shot our short film Yellow Bird for RTE back in 2019 in Castletownshend, and it makes all the difference when locals get involved,’ she said.

‘The support you get from the local community makes the film better and positions it better for festival awards and recognition.’

The chance to film in Cork and promote the county as a destination for film crews was one that appealed to both Gráinne and Lochlainn.

‘Gráinne and I are both proud Corkonians and we’d absolutely love to see Cork develop and become a bigger player in Ireland’s expanding film scene,’ said Lochlainn.

‘The more films that get shot here, the stronger the chance of future development and funding down the line. That’s something to aspire towards outside of hopefully making a brilliant little film in a stunning place!’

The filmmaking team were one of ten recipients of Screen Ireland’s cornerstone short film scheme, Focus Shorts, which will see them receive €60,000 towards filming.

'Thanks to the Screen Ireland budget, we are able to prioritise hiring local crew and showcase the scenic locations Cork has to offer,' said producer Natalie Britton, who added that aside from the positives for the region, shooting in West Cork is 'essential for the authenticity of the story we are telling.'

As part of the scheme, Guinness & Coke will go on to screen at film festivals around the world after a Screen Ireland-supported world premiere at home.

No experience is needed for anyone wanting to volunteer, with producers promising everyone will be well looked after on set.

‘The film is set in 1990s Ireland so we will also be looking for vintage or older type cars, props, and costume, and of course maybe a few sheep and dogs for set too!’ said Gráinne.

‘We are also on the hunt for a house in Castletownbere to film in, something with an early 1990s aesthetic.’

Casting is currently underway for the main role of Oscar, with no experience required to apply. 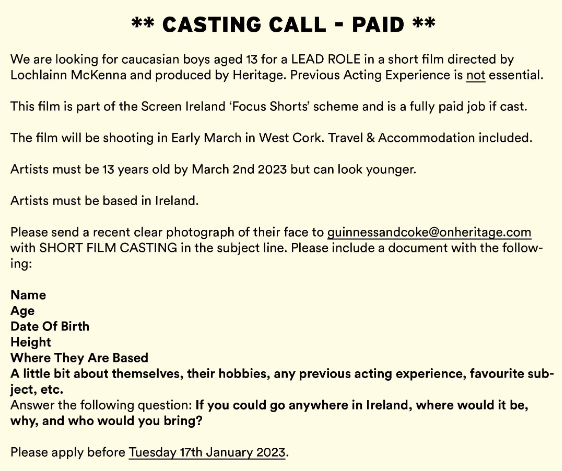 The deadline for applications to play the lead role is on Tuesday, January 17th.

If you are looking to volunteer on set or become an extra please email [email protected] Extras aged from 8 to 90 years old will be needed.

The film will be shot on various locations around the Beara Peninsula on the 4th, 5th and 6th of March.