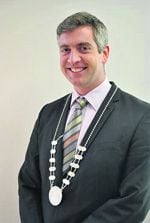 Cllr O’Sullivan was speaking at this week’s Municipal District of West Cork meeting in Dunmanway after his chairmanship was proposed by fellow party member Cllr Joe Carroll (FF).

‘I would like to thank my proposer Cllr Joe Carroll and commend the outgoing chairperson Cllr Patrick Murphy who faced a difficult task last year following the abolition of town councils. It’s a great honour to be the second chairperson of this Municipal District,’ said Cllr O’ Sullivan.

‘I hope to be able to conduct future meetings in a organised manner and the next 12 months are an important time for West Cork with the ongoing reviews of the boundary extension decision, which will have a huge effect on this division.

We need to ensure that any decision made in relation to this has the best interest of West Cork at heart.

‘I’m passionate about promoting a lot of projects in West Cork and we face huge challenges in the next 12 months in terms of funding and it’s important that we as a Municipal District stay very unified. If I need to lead delegations to the likes of the NRA, then I am prepared to do that.

‘I feel that it’s important that we become more than just a body giving out grants and that we have a more focused and strategic approach to West Cork,’ added Cllr O’Sullivan.

Outgoing chairperson Cllr Patrick Gerard Murphy said one of the highlights of the past year while he held the chairmanship was that a Municipal District meeting was held in Castletownbere for the first time, which was welcomed by many locals there.

Cllr Declan Hurley then proposed Cllr Murphy as vice-chairperson, which he duly accepted.