Brian Horgan was a new entrant to dairy farming in 2020 when he began milking with his Lely Astronaut outside the village of Enniskeane.

Brian was beef farming prior to this but he always had a love of dairy farming and had a desire to establish his own herd. Having considered his options Brian commenced milk production on his farm in February 2020.

The milking platform extends to 45 acres, in which he operates an ABC grazing system. Brian milked 55 cows in his first year and 66 cows at peak this past year.

In the first year, the herd mainly consisted of heifers with some cows added as well. Brian supplied 493 kgs of milk solids to Bandon Co-op in the first year at 3.91% fat and 3.50% protein with a cell count of 121,000.

To reduce costs Brian places a great emphasis on the importance of grassland management, and he aims to get cows into the optimum pre grazing covers throughout the year of between 1,400- 1,500 kg DM/ha.

'Getting the grass right is key for my system here. I try to get as much quality grass into the cows as I can'.

While considering his options of getting into dairy farming, it was a trip to the National Ploughing Championships in 2018 that opened Brian’s eyes to the possibility of installing a robot. 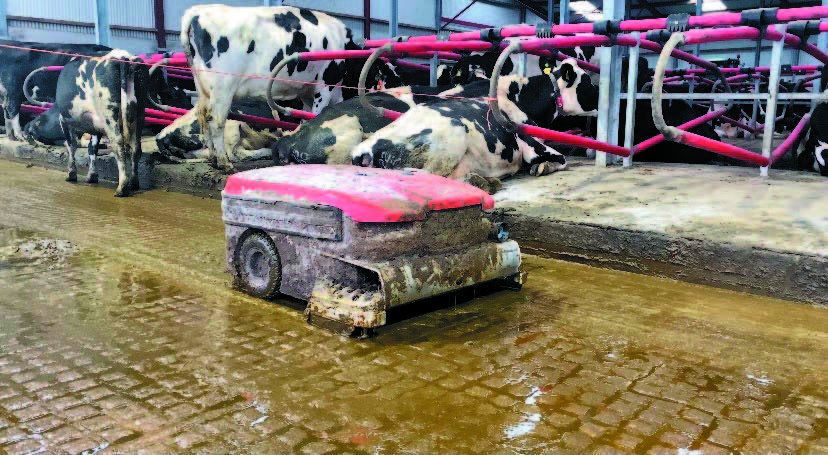 It was a visit to the Lely stand and the opportunity to see for himself how an Automated Milking System (AMS) works that put him on the road to where he is today. Brian went to see existing Lely farms to see if it would work for him: 'It was when I went to see robots working on different farms that I really felt it would suit my farm here'.

Brian is also part of his family’s contracting business so flexibility was a key consideration for him.

The flexibility provided by a Lely astronaut allows him to comfortably mange his dairy farm alongside his other off-farm commitments.

'We have off farm commitments here contracting, so the flexibility the robot provides me is essential to manage these.'

Brian feels the information the Astronaut gives him is key to making management decisions on a daily basis.

Some of the advantages he finds include:

• Feed to yield: allowing for more efficient use of feed
• Health report: this allows for any sickness to be detected early, allowing for more effective treatment
• More milkings: Brian’s cows average close to 2.5 milkings per day across the lactation
• Activity monitoring: Brian finds the heat detection very accurate
• Cell count and udder health monitoring: Brian plans to use Selective Dry Cow Therapy (SDCT) this year. The provision of daily cell counts for each cow gives him greater confidence in identifying the cows suitable for teat sealer only.

'I use the information the robot provides me to make my decisions. I can see the cows cell count throughout her lactation and if she had any spike or a case of mastitis, I know then that she’s not a candidate.'

Some goals of Brian’s for the future include growing cow numbers to 70 going forward and to maintain the herd at this level.

As well as this, he aims to increase the percentage fat and protein in the herd to increase output further as the herd matures.

When Brian made the decision to install, an AMS he felt a reliable back up service that he could call upon when needed was essential: 'Service and backup is essential with any machine as I know from contracting. Also this is a big change from what I was used to at home where they milked with a parlour.

'This machine runs 24/7 and Lely Center Mitchelstown have great backup on the service side as well as a farm management support team to help with the start-up and transition period as well as ongoing support when I need it.'

Please join Lely Center Mitchelstown for an open day on Brian Horgan’s farm on the 26th of November from 11am – 3pm.

For anyone with an interest in robotic milking this is a great opportunity to come and see a top class farm in operation.