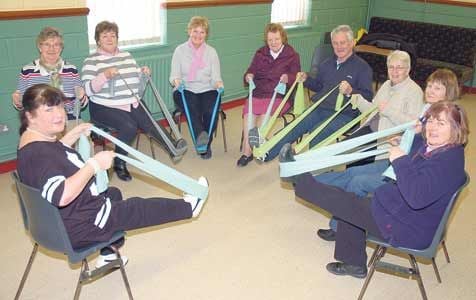 ‘We started very humbly and very small,’ says Bernadette O’Leary who is assistant treasurer. ‘A wonderful woman – Maureen Dempsey – came to Coachford, and she started us off. She was in an active retirement group in Greystones and she came and got Nora Crowley, Anne McCarthy and myself involved. She didn’t stay here long, but she left us with this gem.’

They kicked off with short mat bowls. ‘We do that every Monday and Tuesday. We go to Killarney every year for four nights and we go to competitions all year round,’ Bernadette says.

Some members have done computer classes at the local community school following up with evening classes in Ballincollig. On Monday evenings there’s bridge at Breathnach’s Bar and on Tuesdays there’s spoken Irish.

‘On Wednesdays we go to the Castle Hotel. We’re in the pool for 10am for water aerobics. We do the aqua aerobics for half an hour and then we swim or do whatever we like for the other half hour,’ Bernadette says.

‘Lace’ is on the last Thursday of every month and Noreen Walsh explains that this includes all crafts. ‘You could do any craft you feel like doing from the fine lace which we have an amount of – Mount Mellick, embroidery, knitting, crochet.’

Exercise classes are held every Thursday. Bernadette and her husband Pat qualified as PALS (Physical Activity Leader) instructors in a programme funded by the Irish Sports Council, which was then introduced to the various groups by the HSE. The idea is to get older people more active more often through a series of exercises, games, activities (e.g. basic line dancing) stretching and aerobics.

Theatre is very popular amongst members of the group. They’ve travelled to Dublin and Belfast and are regulars at the Briery Gap in Macroom. A group recently went to the Strauss Gala in the National Concert Hall.

Anne McCarthy, who is treasurer of the association, outlined just some of the other trips they’ve been on. ‘We’ve had outings to Glenstall Abbey. We’ve been to Belfast and the Titanic exhibition. We’ve been to Glasnevin to the Botanic Gardens. We’ve also done a tour of Dublin churches, the Chester Beatty Library, Dublin Castle and Aras an Uachtaráin. We’ve been to meet the President Michael D Higgins and his wife Sabina. We had a wonderful, wonderful day,’ says Anne, adding that they had both tea and a drink with the President. ‘Gosh we’ve been to loads. We’re very, very active. We’re over-active!’

Trips to the local garden centre, Griffin’s – the local tea house, and a local herbalist’s garden are popular and flower arranging is an annual Christmas activity for the group.

Sheila Crowley, who’s been involved since the beginning, says: ‘I love the exercises, the lace classes and the outings and meetings in general. It’s a great group and we have great camaraderie.’

Vonnie Steffens has lived in Coachford for the past 30 years. She is now secretary to the group having got involved three years ago. There are members who are born and bred in the area and many from outside. ‘It helps because I’m a stranger to Coachford,’ she says.

There is somebody in charge of every activity and the executive sees after the tours; Sheila Donovan looks after the bowls, Mary Spillane sees after the booking of the hall as well as the conversational Irish, Margaret Linehan lets people know what’s happening with aqua aerobics, Joan Hayes collects the books for the book club from the library and returns them. The book club meets at the Community House in Coachford on the first Monday of every month to discuss that month’s read.

Yvonne Barrett from Farran, says ‘I’m living locally and I’ve retired and I heard about the group so I decided to join for the social element of it.’ Another member – Norah Norton – finds great benefit from the exercise classes. ‘I don’t make lace, I don’t arrange flowers. It’s for the line dancing and you wouldn’t believe the exercises that start with you sitting in a chair. It’s totally scientific and it’s amazing.’ She goes on to explain that these exercises which are performed while sitting in the comfort of a chair help to loosen wrists and fingers and even people with arthritis can get up and do more physical exercises once they’ve loosened up with these. ‘The water aerobics classes are fabulous, really fabulous. I’d do them two days a week if I could but we don’t have enough days,’ Norah laughs.