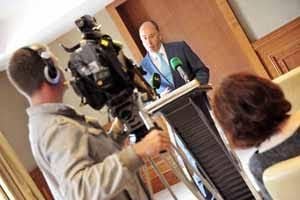 AS predicted in this week's Southern Star, County Mayor, Cllr Alan Coleman has today resigned from the Fianna Fáil party.

Cllr Coleman has cited a disconnect by the Fianna Fáil leadership with every day local and national issues as his reason for resigning.

'Travelling throughout Cork county as Mayor in recent months I have observed a palpable air of dissatisfaction with the lack of vision and leadership of Fianna Fáil,' said Cllr Coleman.

'Fianna Fáil is clearly lacking policies that will improve the country we live in and as an experienced publicly elected representative I listen to the people that elect me and who I serve. From meeting these people it is clear that issues that effect urban and rural Ireland are not being brought to the fore by Fianna Fáil.'

'I have been considering my future for some time and the groundswell of support towards me from people throughout West Cork has persuaded me to move forward as an Independent,' said Cllr Coleman, reflecting on his decision.

'I have made many friends in politics, particularly in Fianna Fáil but today this is a selfless decision by me to allow the constituents of Cork South West to elect an experienced, capable and proven representative. Since 1991 every time I stood for public election I have been returned and I look forward to the opportunity of representing the views of Cork South West effectively in Dáil Eireann.'

Cllr Coleman added that the Fianna Fáil has become 'reactive rather than proactive towards issues that impinge on farmers, small businesses and fishermen alike.'

'Rural Ireland has been decimated by the present Government and Michael Martin has failed to act.'

First elected as a councillor in 1991, Alan Coleman was the first Fianna Fáil Mayor of Cork County elected since 1990.