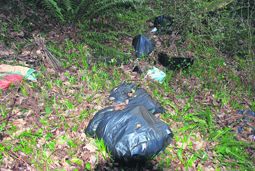 ‘WE are the custodians of the Wild Atlantic Way,’ says Teddy Browne, Cork County Council’s Waste Inspector in West Cork. ‘We have a huge product to sell, but the foundation block of that is a clean environment.’

With major clean-ups having taken place in recent weeks, right throughout the region, Mr Browne was praising local community groups and the ‘spirit’ of co-operation which is helping to clean up blackspots.

‘If we clean up the blackspots once they happen, they are less likely to see an accumulation afterwards,’ he pointed out. He said that, for his 15 years in the role so far, he has never seen more community activity on the roads of West Cork than at present.

‘Networking is a huge part of my job, enforcement will not work on its own,’ he added, but pointed out that the €150 on-the-spot fines are also a huge deterrent.

Many local service stations have stated they no longer provide customer bins outside, despite having deli counters, because the public were depositing their domestic bags in them.

‘I moved my bin inside the door, and they are still doing it,’ one petrol station owner told the Star recently.

‘Since the introduction of the Green Flag initiative in schools, under the auspices of An Taisce, we are getting great support,’ says Teddy.

The issue of marine debris is also something that needs to be tackled, even though some of it might not originate in this country at all. But the Clean Coasts groups and roadshows are a huge assistance in tackling this scourge, too.

This year’s recycling day for electrical waste – with WEE Ireland, will take place in Bantry, Dunmanway and Drimoleague on Saturday April 25th. The Council’s Litter Challenge throughout the summer sees every participating community group getting an allocation of €150 towards planting in their area.

And local firm KWD have launched a clean-up day on Saturday April 18th this year. On this day KWD encourages people to go out into their local communities and pick up whatever litter they can and they will arrange collection of bags. (For more, contact 087 1253648 or 027 56673.)

As the plastic bag initiative worked very well, maybe there should be another levy on plastic purchases, like bottled water, said Teddy.

‘The biggest issue we face is persistent littering,’ he said. ‘You normally find this on roads outside towns, where people seem to think it’s acceptable to throw the coffee cup they have just finished out of their cars.’

He added: ‘People need to take a social responsibility, and stop this anti-social behaviour.’