WITH summer just around the corner, West Cork is gearing up to welcome back the tourists.

As the second year of the highly-promoted Wild Atlantic Way (WAW) begins, towns and villages across the region are vying to attract the biggest chunk of visitors coming to tour the route.

Window boxes are being planted, shopfronts are being spruced up, and Tidy Towns groups are out in force to put their area’s best face forward.

Yet, there is one blight on the landscape which could pose a serious threat to the region’s tourism industry: illegal littering.

Tourism Minister Paschal Donohoe told The Southern Star, on his recent trip to West Cork, that litter posed a serious threat to all the good work done promoting the WAW.

‘It has the potential to be very damaging to the Wild Atlantic Way,’ he said. ‘We have to keep it (WAW) authentic and keep it clean.’

Since the hedgerows and ditches have been cut back in recent weeks, they have inadvertently exposed a nasty scourge beneath – rubbish.

We set our staff a mission for the past fortnight – to keep an eye out for litter blackspots on both the main roads and bye-ways of West Cork.

And what we found was shocking: on most of the roads surveyed, litter could be found in ditches, bushes, and sometimes just lying on the tarmac.

All along busy tourist roads, like the N71 through Clonakilty and Bandon, and the Dunmanway to Drimoleague road – the main routes to the area from Cork and Dublin – we found examples of indiscriminate dumping.

Plastic water bottles and paper coffee cups seemed to be the prime culprits on the N71, with two particularly bad stretches outside Clonakilty, on the very scenic Rosscarbery side, and more on the road to Skibbereen, just wards from the lovely Dromillihy forest walk.

But there were also examples on lesser-travelled routes but highly scenic areas like Castlehaven and Baltimore, leaving one to wonder why the message of civic mindedness is not getting across to road users.

One of our reporters even found a bag of dirty nappies and used sanitary towels, just thrown at the side of a busy road.

‘A litter bin in Kinsale on Saturday at 6pm,’ he tweeted on March 25th, ‘Does Cork County Council not work on the wknd? Shame on them!’

Yes, we all have to pay to have our rubbish disposed of now, and yes the ‘bring’ centres have cut back on opening hours. But does any of that justify the attitude of the person who opts to throw a bag from a car, toss a water bottle or cup out a window, or deposit an entire week’s domestic litter into a ditch?

And despite numerous anti-littering campaigns, publicity about fines for dumping and ‘green’ schemes and competitions in our schools, the message is not being heard.

Would any of these litter-bugs want to holiday in a place where the locals just discarded their debris on the side of the road?

Then, how can we expect tourists to come here and want to come back, if their first impression of an area is determind by hedges filled with plastic and paper?

Yet for every bad egg, there are several good Samaritans, organising clean-up days and targetting the worst blackspots.

The people of Bealad near Rossmore outside Clonakilty are one group made up of such Samaritans.

A few weeks ago, they held their annual clean up, organised by the Kilmeen and Castleventry Community Development Association. 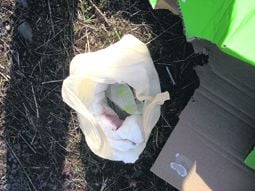 Some rather unsavoury rubbish on the Ballydehob to Bantry road.

Assembling at the Bealad Community Centre one Saturday afternoon, armed with bags, gloves and rubbish picks, 59 great locals managed to collect almost 130 bags of rubbish in under three hours.

Bags were donated by An Taisce, the County Council and from their own reserves, and this is the second year of their clean-up.

Then they simply organised for the County Council to collect the bags from one central location.

Their next clean-up day is this Saturday, weather permitting, at Rossmore car park, from 2.30pm. ‘All we need are the bodies and we will supply them with a cup of tea afterwards,’ organiser Jason Collins told the Southern Star.

Such DIY ventures are now commonplace throughout West Cork, and we saw a massive ‘city’ version recently undertaken, backed by businessman JP McManus in Limerick, with his ‘Clean Up Limerick’ campaign.

Back in West Cork, Alice Taylor in Innishannon has been to the forefront of drives in her picturesque village to keep it among the top earners for points in the county’s Tidy Towns entrants.

‘Adopt a Road’ schemes, like the one currently successful in Carrigaline, is another great way of keeping an area litter-free.

But surely it’s a poor sign of a society when we have to group together just to clean up other people’s messes.