THE Office of Public Works (OPW) is taking legal advice on the challenge to the Bandon Food Relief scheme by a contractor who wasn't placed on the shortlist for bids. 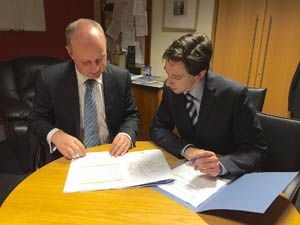 THE Office of Public Works (OPW) is taking legal advice on the challenge to the Bandon Food Relief scheme by a contractor who wasn’t placed on the shortlist for bids.

The news was confirmed this week by Fine Gael TD Jim Daly, following a meeting with OPW Minister Simon Harris TD about the scheme.

Speaking following the meeting, Deputy Daly said that while the Government was ‘fully committed’ to the provision of the scheme and the funding is secure, there has been a legal challenge.

‘Minister Harris confirmed to me that the current position is that the procurement process to appoint a civil works contractor has been legally challenged at the pre-qualifying first stage by a contractor who has not been placed on the list from whom bids will be invited,’ said deputy Daly.

‘The OPW is currently taking legal advice on this matter and, as such, is not in a position to provide an update at this stage on the timescale for the appointment of a contractor,’ he added.

He said he had been advised that the current legal issue will be resolved ‘as quickly as possible’ and that the project can then progress to the construction stage.

‘It is expected that construction of the scheme will take approximately two years to complete from appointment of a successful contractor. It is important to note that funding is secure for this project and will be made available once due process has been completed,’ said Deputy Daly.

‘Any delay to constructing the Bandon flood relief scheme is most unfortunate, however the OPW, like everybody else, has to conduct its business within the parameters of the Irish legal system,’ he concluded.