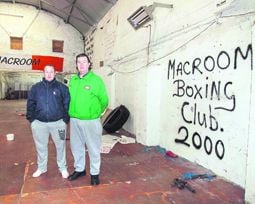 Head Coach Tom Power with coach and referee John Casey clearing out the last pieces of equipment from Macroom Boxing Club before is closes officially this week. (Photo: John Delea)

THE future of Macroom Boxing Club is in doubt as the club struggles to find a new home.

The club, which was based for the past five years rent-free at Nevilles in Masseytown, is now homeless, following a decision by the owner of the premises to decide to charge rent to the club.

‘We can’t afford the rent that is being proposed for this building so, in effect, we have had to close the club and put our equipment in storage until we can find a suitable place,’ said Tom Power, head coach of the club, speaking to The Southern Star.

‘It’s very sad as we are doing something great here for youngsters in Macroom and all we need is a home. We need a 20ft by 30ft space for the club and I’m appealing to anyone in Macroom to help us,’ he pleaded.

The club has already produced some promising boxing talent with Christina Desmond having boxed at the World Youth Olympics last year and she has just turned senior. Another former member of the club is Noel Murphy who has gone to America and recently turned pro.

‘At the start of the year we would have anything up to 70 members and while it might drop towards the end of the year, we still operate as a club. We’re actually bringing two boxers up to Cork three times a week just to continue training,’ said Tom.

The club could also risk losing affiliation with the Cork County Boxing Board because it does not have a premises. While they will have a year’s grace, after that they will have to hand back their equipment to the Board.