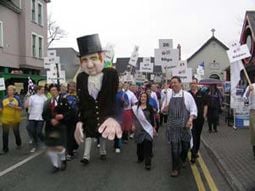 KINSALE is once again on the lookout to find Ireland’s Champion Chowder Chef on Sunday April 19th at the All-Ireland Chowder Cook-Off at Acton’s Hotel.

The All-Ireland Chowder Cook-off is the highlight of a two-day Family Festival – the ‘Taste the Wild Atlantic Way’ Street Food Festival – that will take over the streets of Kinsale on Saturday 18th and Sunday 19th April.

The town will be transformed into an open-air street market with food stalls with free samples and take-home food for under €5.

Members of the public will be the judges in the All-Ireland Chowder Cook-off on Sunday. Tickets are available from Finishing Services on 021-4773571, or at the door.