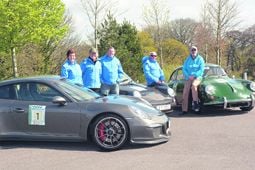 A CONVOY of more than 50 Porsches will descend on Kinsale this Saturday, as they complete their tour of the Wild Atlantic Way.

The Porsche Club of Ireland has teamed up with Fáilte Ireland to send the cars from Malin Head to the Old Kinsale Head, arriving this Saturday, May 23rd.

The cars will have travelled over 2,000km along the West coast, visiting all 15 signature discovery points on the Way, making it the longest ever ‘run’ undertaken by Porsche enthusiasts’ club.

Porsche Club Ireland is the official Porsche club of the Republic of Ireland and currently has over 350 members. All drivers taking part in the ‘run’ have been equipped with Wild Atlantic Way route maps and the 150 ‘Secrets of the Wild Atlantic Way’ guide. They are also wearing Wild Atlantic Way signature jackets and each of the cars involved will carry a Wild Atlantic Way car livery in homage to the Porsche motorsport tradition The drivers are also tweeting and posting content online in real-time using the hashtag #wildatlanticway.