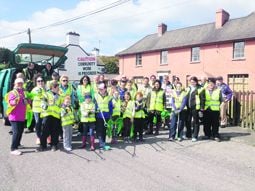 A MASSIVE Spring clean-up of roadside litter from the Ballygurteen, Bealad and Rossmore areas (referred to in The Southern Star of April 11th) has now been successfully completed by the members of Kilmeen and Castleventry Community Development Association.

One hundred and two volunteers, working over three Saturdays, collected three hundred and seventy bags of rubbish weighing over five tonnes from an estimated fifty miles of roadsides in these and surrounding areas.

All of the volunteers involved in this united community effort, which is fully supported by An Taisce and Cork County Council, urge members of the public, especially motorists, not to dispose of their rubbish on public roads, but to show West Cork at its beautiful best, not only for tourists but for local inhabitants who use these roads daily.

Most of the rubbish consists of plastic bottles, coffee cups, sandwich wrappers, crisp bags, cigarette boxes, beer cans, vodka and whiskey bottles, nappies and domestic waste. Most of it is thrown out by passing motorists.

‘Sincere thanks to all at the Star for highlighting this problem and for your wonderful support for our efforts, which is much appreciated by our volunteers,’ added Dan O’Leary, PRO of the Kilmeen and Castleventry Community Development Association.