Joe's Bottle even has its own trolley 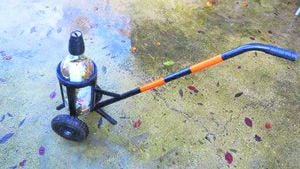 Joe’s Bottle even has its own trolley

THE people of Kilbrittain are to continue the active fundraising of the late Joe Lynch, who passed away in 2012 of a brain tumour.

‘Joe’s Bottle’ was an idea he came up with to raise money for the community.

‘Joe was always thinking and coming up with novel fundraising ideas, one of which was a 5 litre bottle in which he collected loose change from people attending parish events and GAA matches,’ said Annette Hickey of Kilbrittain Community Association. ‘He had planned a “guess how much is in the bottle” competition and the bottle began to fill and it got heavier and heavier, until his friend Paul Hunt designed and made a trolley on wheels to help him to wheel the bottle around.’

Joe’s plan was to seal the filled bottle and to have a fundraiser to guess the amount of money in the bottle. ‘Unfortunately he died before his plan was completed, but the members of the Community Association would now like to fulfill his wish. The proceeds will go to Kilbrittain Community Centre and we would also like to donate 20% of this fundraiser to Marymount Hospice for their great work and their kindness to Joe,’ explained Annette.

The fundraiser has already begun and will finish with the breaking of the bottle in early October, where the winning guess, or nearest, will scoop €1,000. ‘We would greatly appreciate the support of local people for Joe’s unfinished business as he gave his heart, time and energy, to the Community Association here in Kilbrittain,’ said Annette.