Divers from Underwater Archaeology Unit carried out a detailed survey and excavation on a wreck site in Dunworley Bay.

Ireland’s seabed is giving up the secrets of its swashbuckling past as underwater archaeologists from the Dept of Culture, Heritage and the Gaeltacht’s National Monuments Service piece together clues left by buccaneers from the region

THE West Cork coast could once have been like a scene from a Hollywood pirate swashbuckler film with fleets of pirates sailing into the likes of Baltimore and Schull.

Archeologist from the Department of Culture, Heritage and the Gaeltacht’s National Monuments Service (NMS),  Dr Connie Kelleher has been researching and investigating historic piracy along the coast of West Cork for many years, including undertaking her PhD on the subject.

The pirates in question were active in the early 1600s and their mark is still to be found in the rugged and remote landscape of the southwest and scattered on the seabed off the coastline there.

She’s just written a new book The Alliance of Pirates: Ireland and Atlantic Piracy in the Early Seventeenth Century and says: ‘I have always been drawn to the sea and captivated by what lies beneath. ‘They say the sea remembers and I have always thought that if the sea could talk, what tales it would tell!’

The hunt for pirate secrets has captivated her, she admits. ‘It is really the landscape of the pirates that interests me, and how they used it, what made it conducive to their success – where they lived, where they landed, the goods they plundered, is there any evidence for pirate operated ships? Those sort of questions.’

The pirates were predominantly made up of English men, but Irish, French, renegade Dutch, North African and other nationalities were also among their number. They transferred their base of operations from the West Country in England to coastal southwest Munster from 1603 onwards when the new king, James I, clamped down on piracy in England and the ports and harbours used by them.

‘Such were their numbers in their heyday that the king eventually had to pardon most of them. Historical records, though most probably exaggerated, refer to over 1,000 men and fleets of ships in the harbours of Baltimore, Schull/Leamcon and Crookhaven,’ said Connie.

It could be said that West Cork at the time was the forerunner of some of the more famous pirate nests in later history, like infamous early 18th-Century Port Royal in Jamaica and Nassau in the Bahamas – frequented by the more famous pirates of history like Blackbeard, Henry Morgan, Black Bart Roberts, Mary Read or Irish pirate Anne Bonney from Kinsale.

‘I went looking for their cultural footprints in the landscape – and on the seabed. Pirates have always fascinated me.

‘Whether it was the romantic idea of the swashbuckling rogue, or the ships they sailed, they have captured the imagination of generations.’

But in reality, piracy was a business, she says - and survival was the goal. The Munster coastline was more than suitable to the pirates’ needs, Its remote bays and harbours facilitated the secret landing of goods and their secluded settlements in distant places ensured their trade in pirated booty boomed. 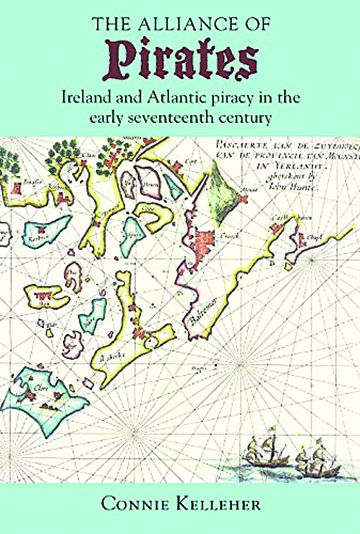 Archaeological sites slowly coming to light along this stretch of coastline and on its many islands include rock-cut steps and platforms that allowed access to and from the sea. Many have associated sea caves where goods may have been stored. ‘These sites are notoriously difficult to date, however, and would have had a long use period by coastal users and mariners, but would assuredly have been availed of by pirates and smugglers too,’ says Connie.

‘A few, like the rock-cut steps in Castlehaven and Crookhaven, are so enigmatic in their nature and location that they strongly signal clandestine usage. It is sites like these, previously not forming part of the archaeological record, that are now coming to light and are being added to our database.’

Wrecks too that could be associated with pirate activity have been located. One, in Dunworley Bay, may be associated with the infamous raid by the Algerine Turks on Baltimore in June 1631. Connie explains: ‘The National Monuments Service’s Wreck Inventory of Ireland Database records a ship lost in Dunworley Bay at that time commanded by one of the pirates involved, Captain Robert Nutt, and named either the Rover or Black Mary.’

As part of its work, the Underwater Archaeology Unit carried out a detailed survey and excavation on the wreck site between 2004 and 2009. While the wreck was not positively identified, the evidence from the wooden structural remains and guns point to a ship dating to the first half of the 17th century.

There’s one big problem with following the trails - it was a clandestine world.

‘Pirates and their activities are notoriously secret, so finding definitive cultural evidence for them is extremely difficult, including for the ships they sailed. They are elusive both in history and in our archaeological record.’

Connie’s research will continue ‘because the archaeological sleuth in me compels me to keep searching for evidence! I am very fortunate that my work within the National Monuments Service allows me to spend time in the environment that I love and see the amazing landscape and seascape, and its diversity of cultural sites.’ There are many other sites, including shipwrecks that have been and continue to be investigated by the National Monuments Service’s Underwater Archaeology Unit, dthat are equally as fascinating as the pirates of West Cork.

* Connie’s book, The Alliance of Pirates: Ireland and Atlantic Piracy in the Early Seventeenth Century is on sale now through Cork University Press.