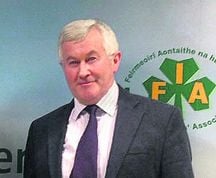 ALL householders should ensure their house insurance policy protects them against any damages arising from attacks by their dogs on sheep, the IFA Sheep chairman John Lynskey has advised.

Some insurance companies provide this cover, he said, explaining that the core of IFA’s campaign to reduce attacks on sheep is about dog owners’ showing greater responsibility: ‘One practical way of doing this is to amend their house policy to include any risk attached to their pet carrying out an attack on sheep and the losses that arise for the farmer from this’.

Mr Lynskey said the devastation and trauma experienced by farmers leaves them seriously questioning their future in sheep production. ‘Unfortunately, I am taking calls on a frequent basis from sheep farmers around the country who have suffered attacks. There are far too many dog owners not taking the responsibility that goes with owning a pet. Dog owners have an obligation to have their dog under control at all times.’

Statistics collated by IFA indicate that the problem of dog attacks on sheep may be in the order of 300 to 400 attacks per annum, with 3,000 to 4,000 sheep injured and killed. He said data on dog attacks gathered by the IFA shows an average of over 11 sheep killed or injured per attack.

The IFA Sheep farmers’ leader warned dog owners that their pets can inflict horrendous damage on a sheep flock in an attack and the owners can be held responsible for the losses involved with serious financial and legal consequences.

He said dog owners are responsible for ensuring that their pets are under control at all times. Based on the annual sheep census, there are 34,304 sheep farmers in Ireland with 2.46m breeding ewes. John Lynskey said farmers have a right to protect their flock.

IFA has put together a protocol for dealing with attacks on sheep, and is available on the IFA website.

The IFA protocol deals with basic questions and also outlines important aspects of the law and how the dog warden service and the Garda can help. It also sets out how to keep a full record of the attack, which can be used as evidence at a later stage.