If Pamela Deasy got her cancer diagnosis 10 years earlier, she’s sure she wouldn’t be here today, and that’s why she says Breakthrough Cancer Research, marking its 10th year, needs to be supported

WHEN Union Hall woman Pamela Deasy was diagnosed with pancreatic cancer, her initial thought was: ‘game over.’

Returning from hospital to her home after getting the news, she said she immediately went into practical mode, and wrote down all her banking and insurance details, pin numbers etc in a notebook, and began to get her affairs in order.

That was in 2018, and thankfully the notebook wasn’t needed, and Pamela, who is very well known throughout West Cork for her involvement with Union Hall RNLI, has made a good recovery.

She says she’s hugely grateful for that, and feels that if she had been diagnosed 10 years earlier, her outcome may have been different, which is why she’s a huge supporter of charity Breakthrough Cancer Research which is marking its 10th anniversary this year. Pancreatic cancer is one of the ‘big seven’ cancers it researches (see panel). Pamela’s diagnosis came in 2018 when she was 46 years old. She recalls how she hadn’t been feeling great that summer in general, and had some stomach issues, and had a kidney stone queried.

‘As winter kicked in, I still wasn’t feeling great. I was getting really tired and everyday tasks were becoming a burden,’ said Pamela, who at the time worked in Kalbos café in Skibbereen.

Her doctor referred her for a kidney scan. ‘I remember the consultant saying “well, the good news is there’s no sign of cancer there”, which was a shock as I hadn’t even factored that in at that stage. But I remember having to stop the car on the way home as I was feeling so sick, and I just knew something wasn’t right.’

Her instincts were correct. By the start of December her exhaustion had become even more debilitating, and after she, and others, noticed her pallor had turned noticeably yellow, she was referred for a full suite of tests to the Bon Secours Hospital where she was diagnosed with a tumour on her pancreas.

‘Straight away I asked if there was a chance it was benign, the consultant said he didn’t think so, so straight away I said “game over” to myself,’ she said.

A treatment plan was put in place and she started her chemo on January 16th, and continued until March.

‘The first two sessions were ok. But after the third, I came home and I just fell in the front door, my legs went from under me. That was the start of the stairs becoming a big issue for me for the next two years. Things were so bad at one stage that I’d put whatever I wanted for the day in a bag when I was coming down in the morning, because there was no going back up until bed time,’ she said.

Unfortunately, the chemo didn’t shrink the tumour and that April she started on a new treatment plan, chemo once a week, combined with radiotherapy every day until May 22nd. 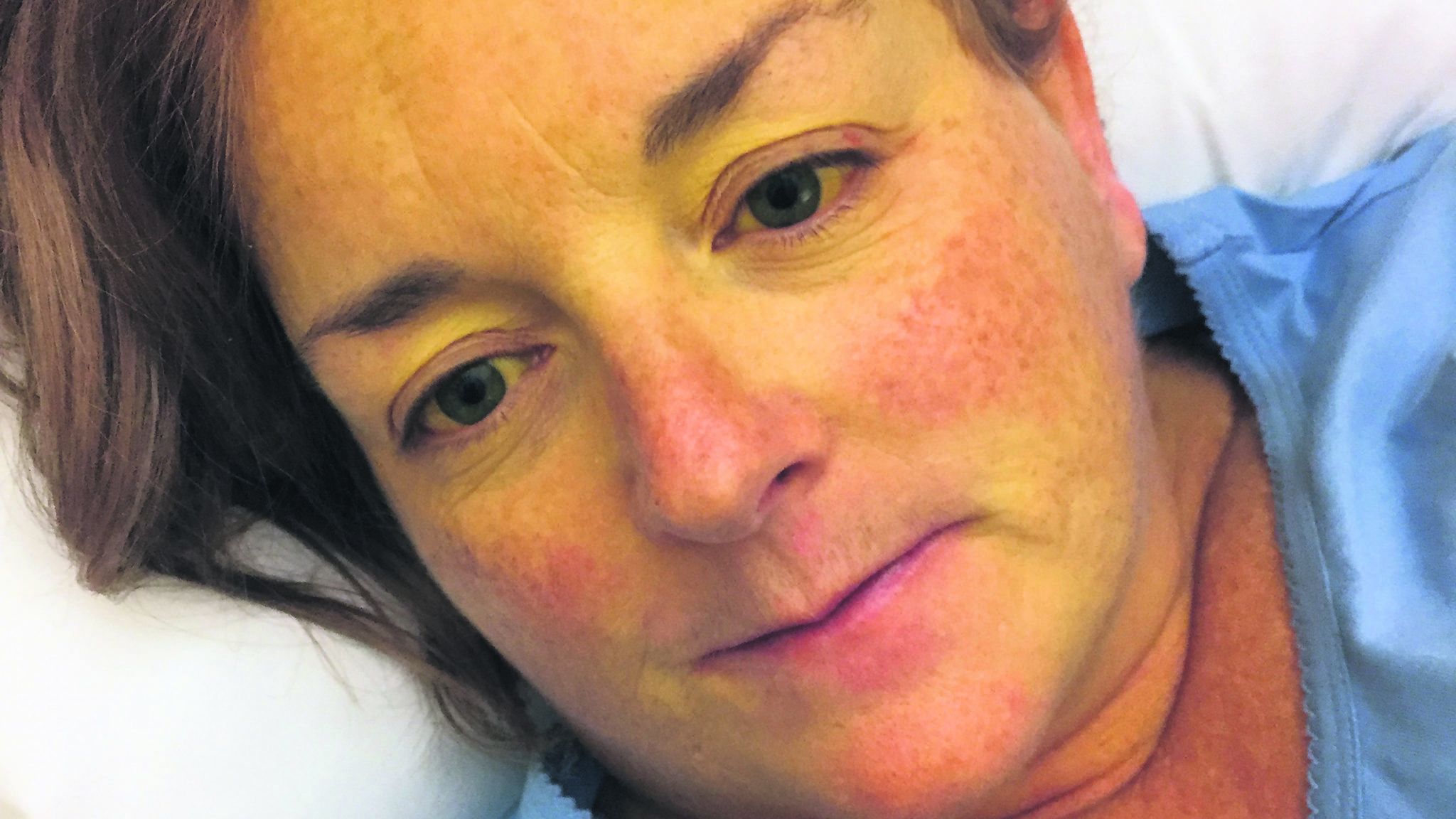 Pamela on the week of her diagnosis in December 2018.

Travelling up and down every day was gruelling and even though the hospital advised her to stay in Cork, Pamela  wanted to come home every evening and to be able to look out her window at the sea.

‘My nephew’s communion was on May 26th and I was determined to be there. They live close by but after the short walk down I slept on the couch for most of the rest of the day, I was so physically exhausted. At the start of June I still couldn’t see any improvement and I was just getting weaker by the day,’ she said.

Pamela ended up back in hospital for six weeks at the start of June, by which time the tumour had shrunk enough for surgery.

‘I had an 11-and-a-half hour surgery on August 15th and had a piece of my pancreas, stomach, intestine, gall bladder, spleen, and all surrounding lymph nodes removed, and after scans that September, for the first time I was told I was cancer-free,’ said Pamela.

She was discharged after two weeks, and then had checks every two weeks but unfortunately she wasn’t thriving.

‘I could hardly walk, not to mind drive, I was still dependant on people, normality hadn’t returned. I was told this was the case with 50% of patients after a surgery like mine, and I was one of them. ‘My surgeon had actually told me it would be three years before I’d return to myself. I had presumed because I was young, I’d bounce back faster,’ she said.

Pamela was also working closely with a nutritionist at this stage as she had lost over seven-and-a-half stone after the surgery. ‘It’s funny as I used to pay money to stand on a scales and be told I’d put on 4lbs before, and here I was trying to even put on a pound!’ 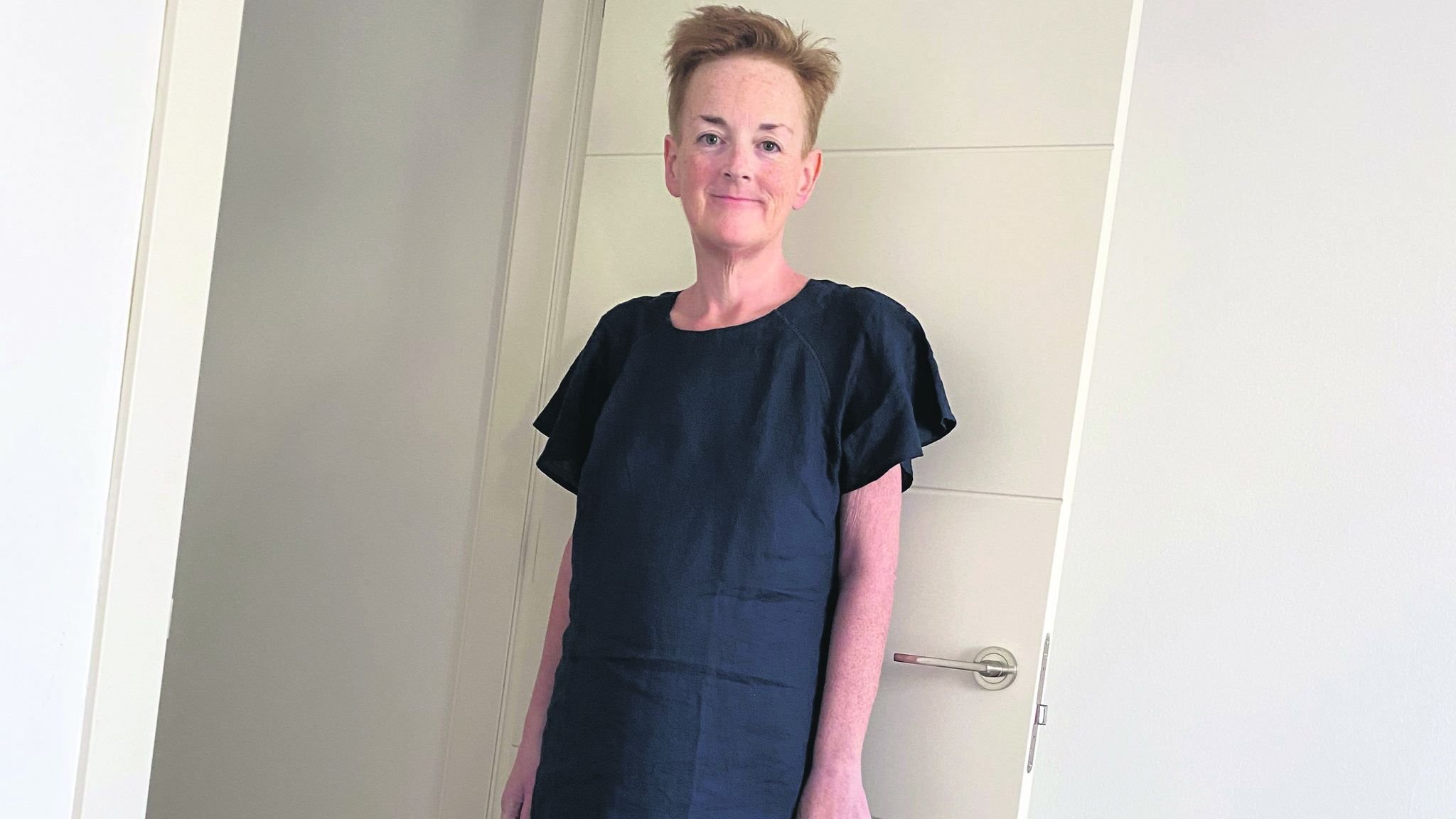 Pamela after her surgery and severe weight loss.

She suffered a further setback when a scan that Christmas Eve showed she was retaining fluid, and needed another procedure that January.

But despite all of this, and the many detours on her cancer journey, she stayed focused on her end goal: getting better.

‘My mind was always 100% able for everything, even though my body was only working at 30%.

‘The night before my surgery that August I booked tickets to go to Lanzarote in March. At that stage I was still using walking sticks but I was determined to go anyway. My nephew came with me and my son and sister also came out, and that was my big turning point. I couldn’t walk at home as I was afraid of falling with the rain and leaves. But where I stayed I was on level ground, and even though it would take me nearly an hour to get dressed, and walk to the sea front from my bed, where I’d sit for half an hour, and spend the rest of the day in bed, that bit of sunshine on my body made such a difference.’

‘I have some mobility issues and tiredness is still a big thing, but I’m very grateful to be here,’ she said.

She’s embarked on a course at UCC where she’s studying religious and global diversity with a view to pastoral work.

‘After the journey I’ve been on, down the line I’d like to help other patients who will get their diagnosis and to be able to talk through things with people,’ she said.

She’s also delighted to be back volunteering with the lifeboat after two-and-a-half years.

Pamela says that one out of two people will be diagnosed with cancer in their lives, and she’s mindful of that.

What got her through her journey?

‘Keeping hope and positivity were two key things for me. Lots of days will be hard, but that day will pass. I always say to try and take positivity from whatever negativity is thrown at you.’

And she urges people to listen to their bodies. ‘If something is bothering you for a few weeks, then go and get checked. Even now I have extreme tiredness and digestive issues at times, so I listen to my body.’

Pamela also says she prefers not to say she’s a cancer ‘survivor’ but is someone who has ‘gone through it.’

‘Those receiving a cancer diagnosis, going through treatment and those sadly no longer with us, are always in my thoughts. I light a candle daily for them all,’ she says.

Currently over 4,000 people die in Ireland each year from the seven most difficult-to-treat cancers that Breakthrough Cancer Research will focus more research funding on: lung, pancreatic, oesophageal, ovarian, liver, stomach and brain. They have a lower chance of survival as they are typically diagnosed late when the cancer has already spread and it can therefore be very difficult to treat. Those diagnosed early (though few) do relatively well.  These cancers are currently under-resourced according to Breakthrough, and poorly served by current treatment options, albeit that combined, they cause nearly half of all cancer deaths in Ireland each year.  It is also expected that the incidence of these cancers will more than double in the next 30 years.

BCR  has strong West Cork ties as it funds Cork Cancer Research Centre which was set up by the late Prof Gerry O’Sullivan from Caheragh. His daughter Orla Dolan is ceo of BCR and said: ‘Research is the only way we will make more survivors. There are new discoveries and new ideas being developed every day that are just waiting for funding. New knowledge means new ideas and leads to better ways to detect and treat cancer.

‘My own father, a surgeon who founded Cork Cancer Research Centre, died from cancer, so I know first-hand that the worst moment is not when you are told you have the disease, but when you are told there is nothing left to try. The treatments available will not be enough to save your loved one. It’s devastating.  But we are not powerless to change it – to take away that day.  Research will find better ways to detect cancer earlier and treat cancers more effectively.’