IT was all talk of a United Ireland at the weekend with the release of a poll showing 62% of voters would support Irish unity. I swear I haven’t heard such clatter about Irish unity since the last time I was last in a pub approaching closing time. You know that wistful hour when you let your guard down and betray some of your deepest feelings? Three or four pints in and you’ll dare to dream of a better world. An island united. Where you will get up early in the morning and go sea swimming. A new land where you’ll be sure to file your tax returns on time and apply for your passport well in advance of your holidays.

Yes, 62% is a large number indeed and with the twin trains of the Brexit sea border and the inexorable rise of Sinn Féin, you’d be forgiven for getting the tricolour pyjamas out, uncorking a bottle of champers and belting out a few verses of A Nation Once Again, if you were so inclined.

But, the devil is in the detail, as it always is with these things. Of this number, 52% said it was ‘not very important, but I would like to see it someday’, while 77% said they would ‘not accept’ a  new flag, 72% oppose a new national anthem and 71% are against Ireland rejoining the Commonwealth. Very little for a Unionist politician with a somewhat open mind to work with there, I would have thought.

Even more tellingly, 79% said they would not accept higher taxes and another 79%  said they would reject the idea if it meant there was less money to spend on public services. So the old misty-eyed Republicanism only stretches so far once harsh economic reality comes into play.

You can’t blame people, I suppose. The cost of living ‘down South’ is already eye-watering, especially for the squeezed middle, with increases in fuel, rents and just about everything else really starting to eat into people’s disposable income, in the unlikely event people have any income to dispose of.

So, saying you want a United Ireland seems to be very much an emotional response. It’s like saying you’d like to lose weight in the New Year but not right now, and definitely not if it means having to do any actual exercise!

Anyone who wants an excellent summation of the complexities of the situation should watch comedian Patrick Kielty’s wonderful address to the Shared Island Forum in Dublin last week. He makes the point that the shared island is already happening today, that most people in Northern Ireland don’t think in the binary ways they once did. They are just getting on with it. Whatever happens in the coming decade, with Brexit still hovering over the Irish Sea like the ghost of Winston Churchill, there are one million people living on this island who will want to remain part of the United Kingdom.

There is no evidence, to date, that people in the South have thought very deeply about this at all. 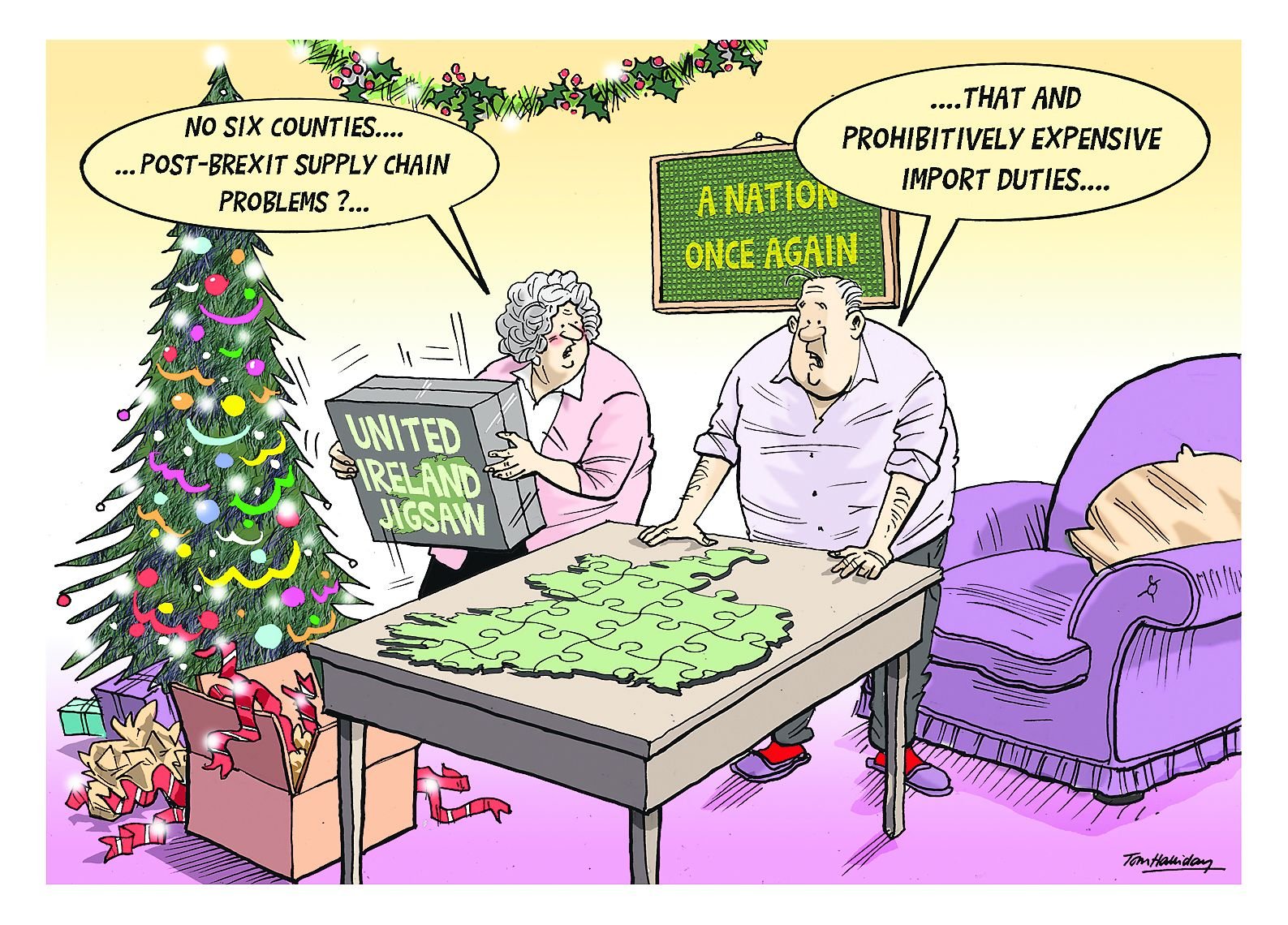 Never too Late Late to watch

I SPEND most of my adult life giving out about The Late Late Show only to be drawn back in – time and again. Last week featured a brave and heartbreaking interview with RTÉ journalist Charlie Bird who has been recently diagnosed with Motor Neuron Disease.

The courage of his appearance and the public outflow of generosity towards him that followed is proof again that the Late Late can still work as a national conversation point – a collective gathering around the fire of a Friday (whatever your views on the host and what he gets paid).

And the appearance of Daniel O’Donnell with his grandkids was as sweet as it was unexpected. And, speaking of  ironic celebrity grandads ...

Gerry’s in his own Lala-land

I KNOW many of you are far too sensible to be spending any extended time on the internet, but what is it with people thinking Gerry Adams is some cuddly little internet meme?

You have to hand it to whoever is managing his social media because, in case you hadn’t noticed, the Shinners are ably recruiting a generation of Hipster Provos online, mostly via the medium of weird internet irony.

A recent video, widely shared on Whatsapp, features Cuddly Gerry arriving at the doorstep of a young couple and singing a Christmas carol for cash.

Adams rings the doorbell and proceeds to sing “It’s the season to be jolly, tíocfaidh ár lá, la-la la-la”. Is this how they raised all that money in America over the years, I thought to myself?

In a chilling end to the video, the young man pays Gerry for his song before looking into the camera and delivering the line ‘they haven’t gone away you know.’

Presumably, Cuddly Gerry’s rapt audience of internet irony merchants is too young to remember watching footage of emergency services rummaging through rubble and carnage on the TV news?

Still, Sinn Féin keep polling higher and higher, rising to 34% only last week, and it seems as if they are going to get their shot at implementing the change they have so long been shouting about.

You’d wonder if people have thought very deeply about this one too, wouldn’t you?