AT this stage, I’ve lost count of the number of times our dear Taoiseach has come before us’ of a Friday’ for one of his customary Sermons At The Plinth. It could be 10, it could be 10,000. This pandemic has done strange things to our perception of space and time.

Micheál gave a nice short mass last Friday though and there was some genuinely good news to impart to the flock.

So this week, I thought I’d take time to clarify some of the finer points that you might have missed. Of course, you should all consult the official public health guidance in the first instance as some of this is just off the top of my head and I warn you now that months spent staring at the four walls has done very strange things to my memory.

June: Accommodation services including hotels, B&Bs, self-catering and hostels to reopen. Services including leisure facilities, indoor restaurant and bar services to be restricted to overnight guests only unless you maybe know one of the lads at the door. Sing-songs will be allowed but ballads are set to be limited to 35 verses.

Numbers permitted at outdoor events can be increased to a maximum of 100, with a maximum of 200 for outdoor venues with a minimum capacity of 5,000. Tony Holohan to be supplied with his own army tank in the event things get out of hand in Dublin city centre again.

Appearances by Professor Luke O’Neill across television and radio to be reduced to once a week throughout June and to be phased out altogether over the rest of the summer. The government feels that the country must learn to survive emotionally without Luke’s informed and upbeat contributions to public life.

July: A pilot scheme will be run to establish if Dara Colleary can be safely reintroduced to politics. In order to fully assess this, he will be installed as Minister For Doing Nothing In Particular for a three-week period. Partial reopening of Driver Theory Test Services will also continue. Anybody who has been on a motorway recently knows that many people in Ireland can really only drive ‘in theory’ anyway, so it’s possible we might just do away with the practical part altogether to speed things along.

Bord Fáilte to launch a new tourist attraction linking Dublin to the West of Ireland called The Phil Hogan Way, a proposed memorial route to nostalgically celebrate Big Phil’s road trip adventures during the early days of the pandemic. Tears may well be shed at the cutting of the ribbon.

Visitors from one other household are permitted for unvaccinated households. Be sensible, though. The usual public health advice applies – wash your hands, keep your distance, open the feckin’ windows.

The number of guests attending a wedding celebration or reception can increase to 25. The government acknowledges that this falls short of the usual 30,000 attendees you might expect at an Irish wedding but ‘we’re in the middle of a pandemic, lads.’ Drunk uncles shimmying onto the dance-floor when Come On Eileen starts will be strictly forbidden, although exceptions apply if he’s ‘wearing a tie around his head.’

‘Talking on the road’ in rural areas to be stamped out altogether over the course of the summer. With traffic levels increasing again, the Government wishes to reduce the amount of people standing around on country backroads, two metres apart, chatting for hours on end, saying things like ‘you’d have nothing to say, would you?’

Outdoor sports matches can recommence and, in a return to pre-pandemic norms, Cork people can resume the yearly ritual of pointlessly raising their hopes for the senior footballers again. Yes folks, nature is healing for sure. 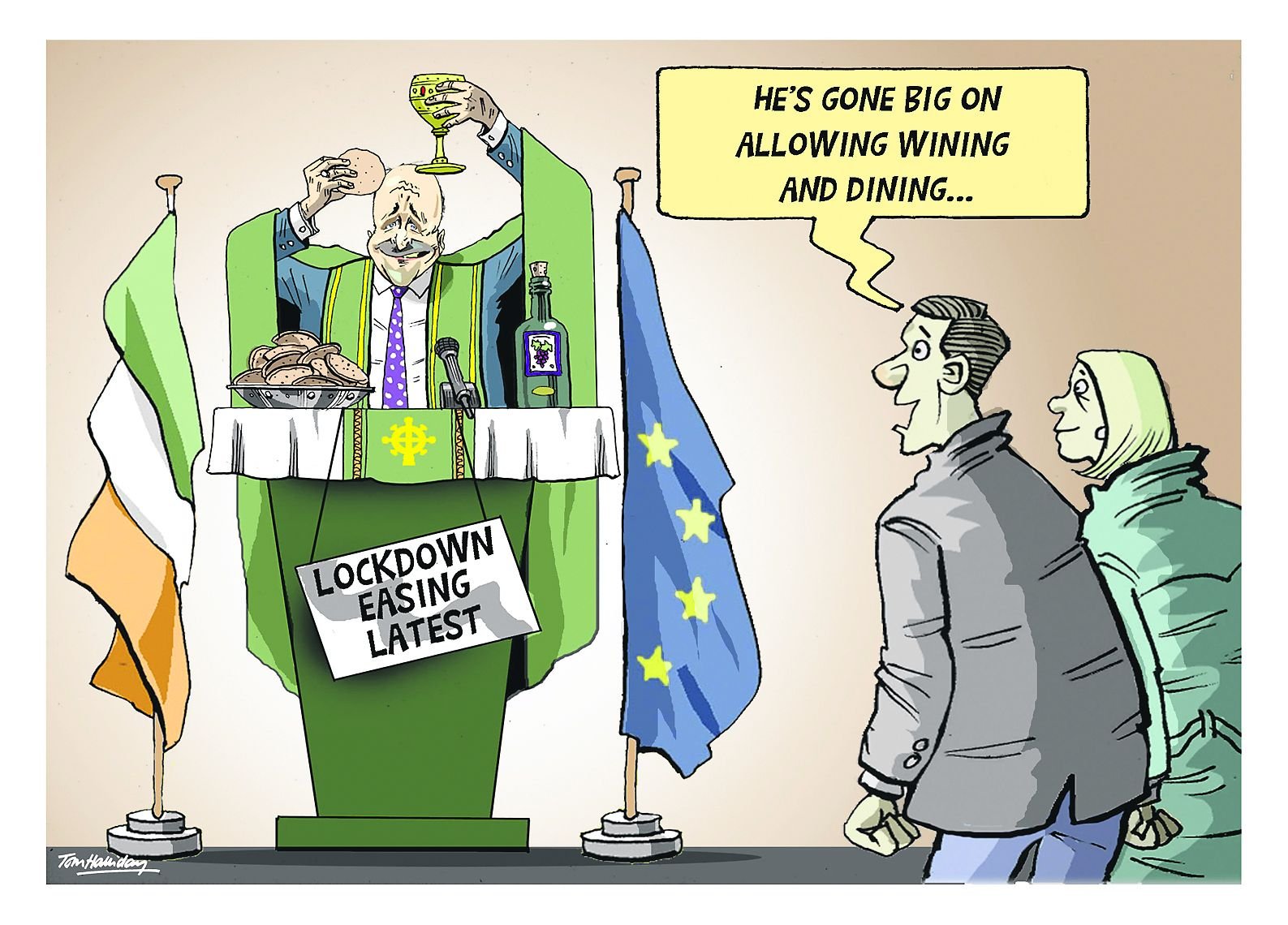 Any of you who spend time on the social networking site Twitter know what a histrionic, often toxic place it can be, even on a good day.

But this week it showed its truly joyful side when former Friends star Matt Le Blanc appeared on the sitcom’s reunion looking very much like a beloved Irish uncle (see pic). The image soon began a meme with Irish tweeters creating hilarious taglines for the photo. Some of my favourites were - @followthelaoide: ‘Old PE teacher supervising your pass Maths class’; @spochadóir: ‘And you paid for them jeans like that you did, with all them holes already in them?’ and @GrantSana: ‘The club man who is a good shout to ask for All-Ireland tickets.’ If it was a Friends episode it would surely be titled The One Where Joey Gets Completely Bemused By The Strange Inhabitants Of An Island On The Western Edge Of Europe