The charred remains of the much-loved buildings on Wednesday morning. (Photo: Garry Minihane)

THE multi-million euro redevelopment of Skibbereen convent will still go ahead, despite the building being devastated by an inferno this week.

Paul Collins, the chief executive of Remcoll Capital, which is planning a €10m redevelopment of the now gutted convent and the chapel, told The Southern Star: ‘We are devastated by what has happened.’

He spoke to the newspaper just hours after an inferno took hold at 4pm on Tuesday and burned through the interior of both the convent building and its adjacent chapel, leaving just the bare bricks of the buildings’ exterior standing upright.

He confirmed that he had discussions with the gardaí and said their forensic teams are currently investigating the site and the possibility that this might have been an arson attack.

On Wednesday afternoon gardaí issued an appeal for any witnesses to the fire, and anyone who might have camera footage which might help them in their investigation. 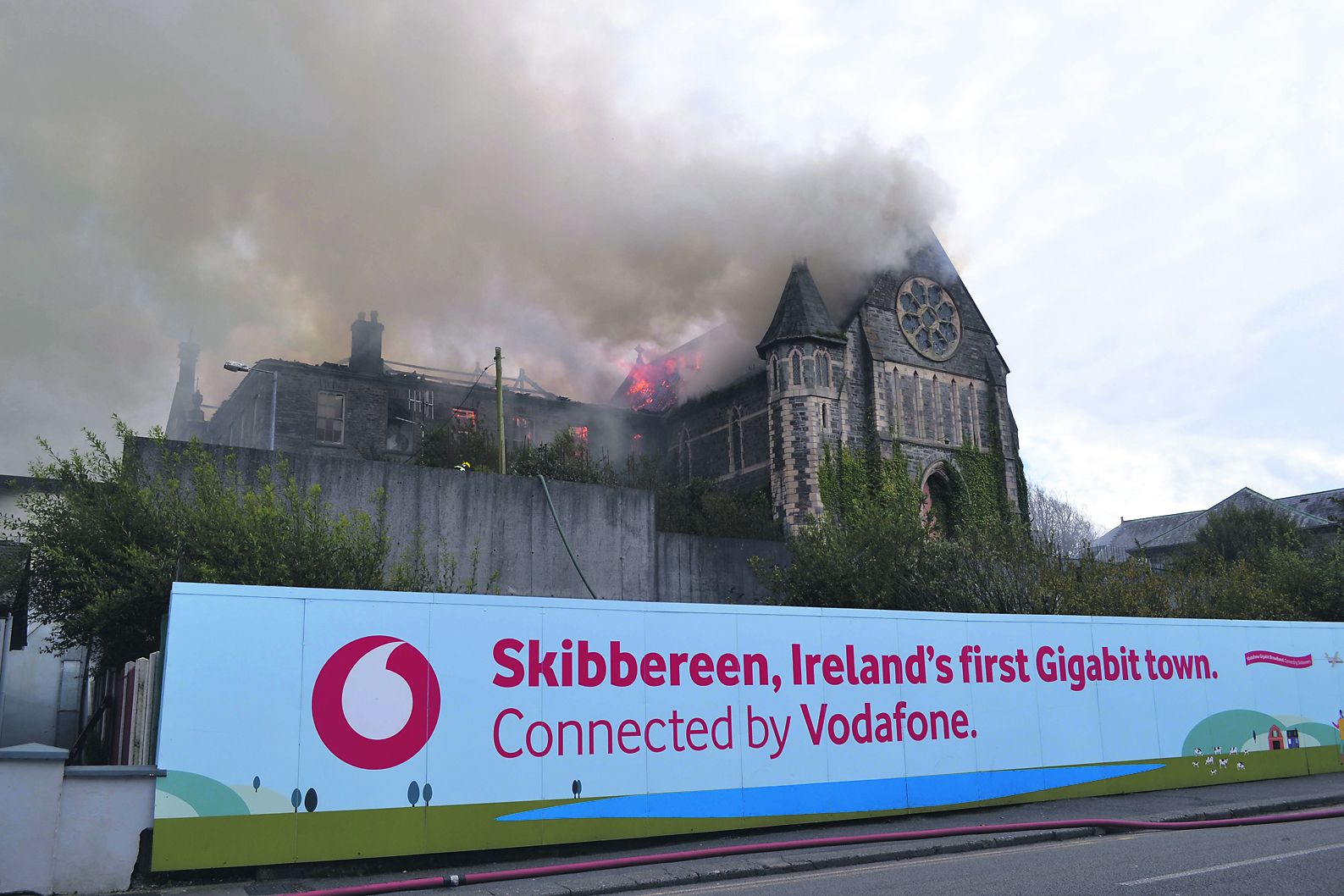 Mr Collins confirmed they were urgently assembling teams to go to Skibbereen so they could ensure that the parts of the buildings – that had been left structurally vulnerable by the fire – could be saved by adding supports.

Mr Collins explained that Remcoll had agreed to buy the religious complex at North Street from the existing owner – property developer Bernard Hennessy – subject to planning.

Mr Collins confirmed that Remcoll will be honouring that deal.

He said: ‘The development will be completed. We will not let what has happened stop us from finishing the project.’

Just last week The Southern Star reported that Cork County Council granted permission for the chapel to be redeveloped as a commercial hub, including hot desks for use by the community, and for the convent building to be turned into apartments.

Planning was also granted for the building of 52 new apartments as part of a new four-storey apartment block on the site.

Meanwhile, it is understood that the finished development will include provision for Skibbereen’s elderly, some of whom are currently living in flatlets on the road beneath the smouldering remains of the convent.

If the blaze was arson, it would be the second such attack on a religious building in Skibbereen.

A former Methodist Church at Bridge Street that dates back to 1833 had been trading as a popular restaurant when a random arson attack in 2006 saw it brought to the same sorry state as North Street.

In that situation, the culprit was caught and the intrepid owner, Regina Daly, rebuilt the business in a timely and sensitive manner, making it one of Skibbereen’s most visited eateries today.

Regina spoke to The Southern Star about Tuesday’s fire, saying: ‘This is a dreadful time for the owners, and it is an awful loss to the town.

‘When I heard it, it brought back terrible memories for me, awful empty feelings.’

‘As someone who has gone through it, I actually feel sorry for the building. But I am proof that the phoenix can rise from the ashes. No one died. It can be rebuilt. It is possible, especially when it comes with the support of the local community.’ A postcard from the 1900s showing the convent building at Cork Road, Skibbereen, in its heyday.

He said: ‘The €10m investment is a big spend in Skibbereen, and the development will be retained and kept within the community.’

Meanwhile, anyone who may have been in the Cork Road area of Skibbereen between 3.15pm and  4.45pm on Tuesday afternoon is asked to contact Clonakilty Garda Station on 023 882 1570, the Garda Confidential Line on 1800 666 111 or any garda station.