THE world's largest battle scene - of the Battle of Waterloo - is arriving to the tiny Gaeltacht village of Kilnamartyra in time to commemorate the Battle's 200th anniversary this summer. 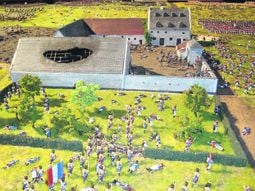 THE world’s largest battle scene – of the Battle of Waterloo – is arriving to the tiny Gaeltacht village of Kilnamartyra in time to commemorate the Battle’s 200th anniversary this summer.

The mighty scene will arrive over the next few weeks and will be transported carefully to its new home in the tiny village of Kilnamartyra, just outside Macroom, West Cork, home to Prince August Toy Soldier Factory.

Ireland’s and Europe’s only Toy Soldier Factory will be displaying what is Phase 1 of the world’s largest battle scene “The Battle Waterloo” the three-day long struggle in June 1815, over rolling countryside between two ridges south of Brussels changed the entire course of European history.

Lars Edman of the Toy Soldier Factory is both honoured and excited at Phase 1 of a five-year plan to depict carefully the three-day struggle.

‘We are delighted with the way the new construction of the enormous room is going, where the large battle scene will reside for the next five years,’ he said.

‘We have to showcase this battle correctly to emphasise to the public how important it was to Europe’s history, so we are planning to incorporate a multimedia show with lights and sound effects in future development into this epic installation as this was a defining moment in Europe’s history, ending 23 years of war,’ said Lars Edman.

The unveiling of the Large Battle of Waterloo diorama will take place on Sunday April 12.

Demand is expected to be high, so booking is probably wise, via www.toysoldierfactory.ie or tel: 026 40342.