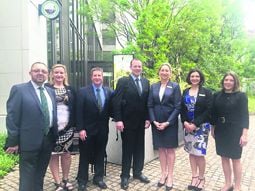 Nuffield scholars, including Máire (second from left), on their way to visit the Australian embassy and parliament building in Jakarta.

NUFFIELD Scholar Máire McCarthy of Innishannon, is currently travelling around the world investigating farming practices and meeting government agriculture officials across the globe. She continues her account this week from Australia.

We had a whistle stop tour of Canberra. We met two Nuffield Scholars who are now Members of Parliament, including the Deputy Speaker of the House of Representatives. We were given a tour of the media offices and introduced briefly to the Speaker of the House – a diminutive but very formidable woman!

We also had the privilege of attending the Australian Parliament House of Representatives during the time for questions without notice – a lively exchange of views between the government and opposition. We were honoured with a dinner in the Parliament House, which was attended by the Deputy Prime Minister, Minister for Agriculture and Parliamentary Secretary for Agriculture, as well as other members with current Nuffield Scholars in their electorates.

We saw the Australian War Memorial including an incredible museum – an absolute must for anyone going to Canberra. We saw the changing of the guard – a very emotional recognition of the many men and women who have given their lives in service of their nation and were given a tour of the city and surrounding area.

We flew from Canberra to Sydney and then, subsequently, to Singapore. Our trip had started in earnest!

In Singapore, we met at the ANZ bank. Singapore is the financial capital of the East. It was very interesting to get a breakdown of where the bank sees agriculture going in Asia.

We attended a discussion with an executive from Monsanto and also four executives from Syngenta – again very enlightening and amazing to see the volume of money involved in the grain industry. The accommodation in Singapore was very central; we were surrounded as far as the eye could see by skyscrapers! We were in a hotel with 70 floors and I was on floor 35.

We visited a roof top garden at the very famous Marina Sands Hotel in Singapore and the cost of a soft drink was ! We also toured the Singapore Gardens by the Bay – a must in Singapore – the biodiversity and use of waste is really well explained in chart form in these gardens.