Finn's Table is the latest restaurant to be added to Kinsale's Good Food Circle of local eateries. It is run by husband-and-wife couple John and Julie Finn. 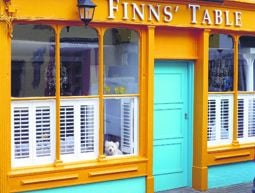 Finn’s Table is the latest restaurant to be added to Kinsale’s Good Food Circle of local eateries. It is run by husband-and-wife couple John and Julie Finn.

KINSALE’S Good Food Circle has added a new member as Finns’ Table at 6 Main Street in the centre of town has joined the group.

Husband and wife team John and Julie Finn run the business together, with John in the kitchen in his chef’s whites, and Julie at front of house.

The duo are no strangers to the restaurant scene – both having started out in Kinsale before successfully opening their own business, Dillon’s Restaurant, in Timoleague, Co Cork, which they ran for several years.

At Finns’ Table, their focus is on good quality food using locally-produced seasonal ingredients, with an added bonus: the meat comes from John’s family butchery in Mitchelstown.

There are now eleven restaurants in Kinsale’s Good Food Circle, working together since 1976, to market and promote their businesses, having learnt that co-operation is more effective than competition.

The Good Food Circle has recently been shortlisted in the final stages for the ‘Best Food Experience’ category in the Irish Tourism Industry Awards.

In addition, the Circle runs two very successful festivals in the town, which is also the starting point of the Wild Atlantic Way.

Tickets for events can be found online at http://www.kinsalerestaurants.com/kinsale-restaurant-events/