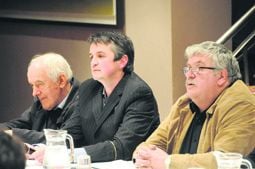 Over 200 farmers and members of the ICSA met in Bantry last week where chairman Dermot Kelleher called on, not only the farmers facing penalties to their single farm payment, but also all farmers to work together to force the Department of Agriculture to remove this penalty system.

‘We have to do something. This is a horrendous situation that is facing farmers right across the country. These penalties are unjust and are being imposed without notice on many farmers who have not done anything wrong,’ Mr Kelleher claimed.

The penalties to the single farm payment are levied by the Department of Agriculture and are imposed when land is outside the area eligible for the SFP scheme.

‘Farmers are being penalised just because they are farming marginal land. The state is facing over €180 million in fines not because of what farmers have done but because of what the state has failed to do and now it is forcing small farmers in West Cork and across the country to pay the price,’ Eddie Punch, general secretary of the ICSA, told the meeting.

Acting on behalf of the ICSA, solicitor Brian Harrington said that, while he was advocating taking a case to the High Court, he could not predict the outcome: ‘While we have a strong case we need to plan for the possibility that the judge will not rule in our favour.

‘This, of course all depends on the attitude of the Department of Agriculture, but I would foresee, in the case of a ruling against the ICSA, that at least €100,000 would be needed to cover costs,’ Mr. Harrington said.

It was agreed at the meeting that an account, organised by the West Cork Community Alliance (WCCA), would be used to fundraise for these costs in the event that they are required.

‘We are fully behind the ICSA in this campaign and will do all we can to support the High Court case,’ Con McCarthy Chair of the WCCA told The Southern Star. At the close of the meeting over €3,000 was collected from those present.