Tourism Ireland ‘wraps’ the Daily Telegraph with images of I

Last Monday's Daily Telegraph was 'wrapped' with images of Ireland, including this wonderful one of the picturesque village of Eyeries on the Beara Peninsula. 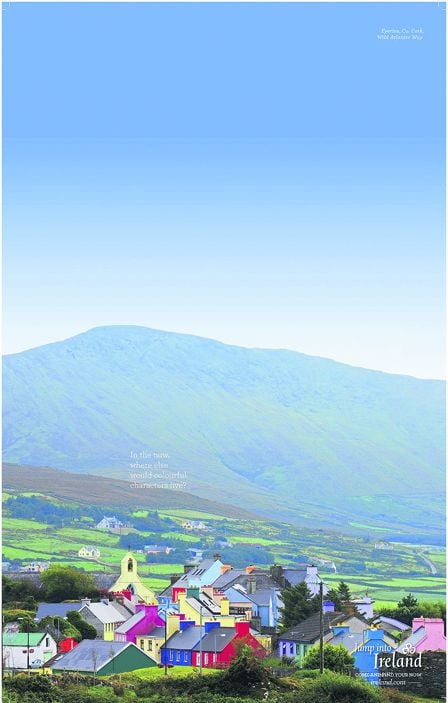 Monday's Daily Telegraph was 'wrapped' with images of Ireland, including this wonderful one of the picturesque village of Eyeries on the Beara peninsula.

TOURISM Ireland began its 2015 promotional drive with an end-of-year campaign that includes ‘wrapping’ the Daily Telegraph with images of Ireland, including a wonderful image of the picturesque village of Eyeries on the Beara Peninsula.

The attractive, four-page wrap – featuring photography shot in Eyeries, as well as the Cliffs of Moher, Powerscourt Gardens in Co Wicklow and Dublin – reached more than 1.2 million ‘culturally curious’ readers across Britain.

The Tourism Ireland campaign – which is being rolled out in Great Britain, the United States and Mainland Europe – has been timed to coincide with the Christmas holiday period and is designed to grab the attention of travellers everywhere as they begin looking at potential destinations and planning their holidays in 2015.

Niall Gibbons, Tourism Ireland’s CEO, said: ‘Our end-of-year campaign has been specially designed to highlight short breaks and holidays in Ireland and to appeal to our key target audiences in Great Britain, the US and Mainland Europe.’

He reported that 2014 was a strong year for overseas tourism, with about 7.3 million visitors – a figure that represents an 8.8% increase in growth on the 2013 figures – which contributed more than €3.6 billion in revenue to the economy, thanks to some clever marketing.