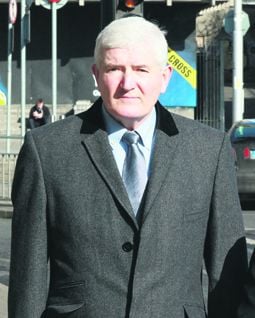 A GARDA has rejected suggestions he and another Detective were asked to ‘put the frighteners’ on Martin Graham in June 1997 after gardai lost trust in Mr Graham as an informant in the Sophie Toscan du Plantier murder investigation.

Michael J McCarthy, now retired, denied Mr Graham’s claims he was threatened with the ‘Provos’ during his detention by Garda McCarthy and Det Garda Bart O’Leary in June 1997.

Mr McCarthy said a colleague of his had been blown up by the Provos and it ‘pains me to even use the word’. He agreed the word Provos would also resonate with Mr Graham as he previously served with the British Army in Northern Ireland.

Mr McCarthy was giving evidence in the continuing action by Mr Bailey against the Garda Commissioner and State over the conduct of the investigation into the murder of Ms du Plantier whose body was found near Toormore, Schull, on December 23rd 1996.

The defendants deny all Mr Bailey’s claims, including wrongful arrest.

Earlier, Maurice Walsh, also a retired garda, reiterated his denial of Marie Farrell’s claim he exposed himself to her in the ladies’ toilets of Schull golf club while saying words to the effect wasn’t “fitting up” Mr Bailey a turn on. When it was put to him Ms Farrell could have put up any scenario if she wanted to ‘shaft’ him, he said: ‘I have no understanding of how that woman’s mind works.’

Mr Walsh said Ms Farrell’s claims were ‘total and utter lies’ and the ‘casual way’ she outlined the alleged incident was ‘horrible’, ‘as if she was talking about a trip to the local shop’. It was ‘incredible’ that he would risk his family and career to do something like that.

Maurice Walsh said her claims were ‘deeply upsetting’ to himself and his family.

The only truth was he and his wife were in the golf club in summer 1998 with another couple. They were celebrating his promotion and the investigation into the murder of Sophie Toscan du Plantier was not to the forefront of his mind.

He denied several other claims by Ms Farrell including he went to her bedroom in a Dublin hotel on a later date while she was in the city for court proceedings.

He said he was based in Dublin at that time and Ms Farrell asked him to meet her for a drink as she knew noone in the city. He said he made a misjudgement and met her in the Hole in the Wall pub before returning her to the Ashling Hotel, but he had not gone to her bedroom.

He also said he was unaware of any underhand arangement or of any arrangement between Ms Farrell and Det Garda Jim Fitzgerald concerning the making of statements by Ms Farrell relating to the murder investigation.

Asked about Ms Farrell’s suggestion statements by her were part of s scheme between Mr Fitzgerald and himself to fit up Mr Bailey, he said he was unaware of any such scheme or of any conversations between Ms Farrell and Mr Fitzgerald concerning statements. He himself took various statements from Ms Farrell during 1997 and 1998 just as she had dictated those, he said. There was no indication the statements were prepared, he added.

Ms Farrell’s claim he told her she would not have a peaceful day in Schull if she withdrew statements was ‘a complete fabrication’. He had also not contacted her about any appeal related to road traffic matters.

Earlier, Det Insp Kevin Gately said he was part of the Nally Garda review team which in 2002 reviewed the du Plantier investigation. The review team did not regard Ms Farrell as a credible witness and he met her five times.

Ms Farrell had walked out of a meeting when it was put to her she had made false reports to them concerning the identity of her male companion who was with her when she said she saw Ian Bailey at Kealfada Bridge near Schull in the early hours of December 23rd 1996, he said. Making false reports was potentially a criminal offence, he added.

It was also put to Ms Farrell she had “changed her story more than once” and had given different accounts of her movements. Mr Justice John Hedigan said the State has sseveral more witnesses left and the indications were the evidence might conclude by early April.