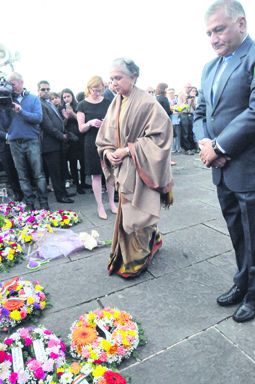 FRIENDS, old and new, gathered on Tuesday morning on a very special piece of land overlooking the still waters of Dunmanus Bay, to remember and pray for the victims of Air India flight 182.

Exactly thirty years previously, at 8.12am on the morning of June 23rd 1985, a bomb exploded on an Air India flight from Montreal to Delhi, just off the West Cork coast.

A total of 329 people died, 86 of them children, and beautiful Ahakista on the Sheep’s Head Peninsula is where the relatives annually come to find some peace.

Joining the relatives at the memorial at this year’s commemoration were Minister for Foreign Affairs Charlie Flanagan; Indian Minister for External Affairs Mr VK Singh; Canadian Justice Minister and Attorney General Peter McKay, as well as the ambassadors from India and Canada.

Representing Cork County was Mayor Cllr Alan Coleman (FF) who welcomed the relatives and the distinguished guests to Ahakista once again, and promised that the monument to those killed that day will always be a priority for Cork County Council.

‘This beautiful place is a symbol of the relationship between the families of those lost that terrible day and the local people of this area. It is a friendship that has grown stronger every year as we gather together once more to remember those who were so cruelty killed that June morning in 1985,’ Cllr Coleman said.

Minister Charlie Flanagan said that this single act of brutal terrorism had joined the people of India, Canada and Ireland together.

‘Time has not healed the sorrow and the loss, there can never be any justification for such violence. While it is sad to be here in such a beautiful part of Ireland to remember such a terrible act, this morning here in West Cork we see nothing but love and support for the families of those who died,’ Minister Flanagan said.

Also attending the commemoration were members of the Naval and Coast Guard services, both serving and retired personnel, who had taken part in the recovery operations.

The Naval vessel, the LE Samuel Beckett, which was holding station in Dunmanus Bay, signalled the beginning of a minute’s silence to remember the people who died that day.

‘We come here to this special place once more to remember our loved ones and to renew long friendships with the marvellous people of this beautiful place. That morning, 30 years ago, our lives were changed forever. We lost sons and daughters, mothers and fathers, brothers and sisters, aunts and uncles. But here in Ahakista we come to find peace and we receive love, support and friendship, and for that we will always be thankful,’ Mrs Padmini Turlapati, who lost her only children – her sons Sanjay and Deepak – said.

Closing the emotional ceremony, an Irish Coast Guard helicopter overflew the monument and the children of the Ahakista National School Choir performed songs in both English and Hindi.