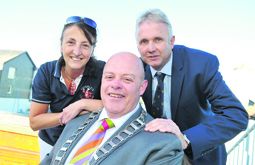 The video was commissioned by the three groups, to celebrate being awarded ‘Best Small Tourist Town’ by Failte Ireland.

County Mayor Cllr Alan Coleman said it was great to see these groups working together in the interests of the town and he called on all local businesses to become involved in Kinsale Chamber.

Liam Edwards of the Kinsale Good Food Circle said it’s ‘a no-brainer’ for organisations in the town to work together.

Drake Roberts and Monique Davis of Paragon Films made the stunning video of Kinsale, with a drone camera, and the help of Jakub Walutek.

It shows stunning footage of the Old Head of Kinsale, Kinsale Harbour, Kinsale Yacht Club Marina, food, culture, shopping and life in the town, shot during the All Ireland Chowder Cook-Off festival.

The summer calendar is now in full swing, with the Kinsale Point-to-Point Festival this weekend, and the ICRA Nationals and Sovereign’s Cup on from June 24th to 27th. The new video can be viewed on the Southern Star’s Facebook page.