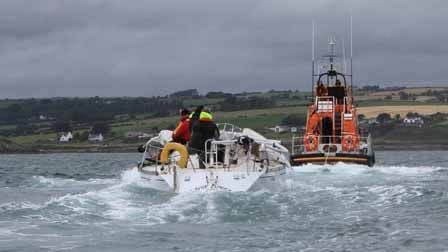 Photo of the rescue by Dave Sheehan

THE Courtmacsherry RNLI all-weather lifeboat was called out at 3pm on Saturday afternoon to go to the aid of a 35-foot yacht that was demasted in strong winds and got into difficulties just one mile off the Seven Heads coastline in West Cork.

The yacht with three people on board was on passage from West Cork when the incident occurred. The Courtmacsherry lifeboat, under coxswain Sean O’Farrell and a voluntary crew of six, was away in minutes, as it was on duty at the Cork County Coastal Rowing Championships at nearby Broadstrand.

The lifeboat reached the stricken vessel at 3.15pm and succeeded to take it in tow. They proceeded to make safe the sails that were engulfed in the water and towed the yacht to the safety of Courtmacsherry Harbour.

The winds at sea in Saturday afternoon were gusty, Force 5 to 6. Lifeboat station voluntary operations manager Brian O’Dwyer praised the quick response of the crew which averted what could have been a dangerous situation as the winds were increasing in the area at the time.