A PAID event, that has been described as a ‘mini festival’, took place recently inside the Special Area of Conservation (SAC) at Long Strand near Clonakilty.

It appears the ticketed event came as a surprise to both Cork County Council and the National Parks and Wildlife Service (NPWS).

Tickets for the ‘festival’ were advertised at €40, including a free jacket, by an ‘adventure’ company on social media platforms, and took place on Sunday August 1st.

The entertainment included break dancing, fire dancing and a barbeque. The poster also advertised the ‘biggest local acts’ and promised that one lucky ticket holder could win €800.

Local TD Christopher O’Sullivan FF said that he had heard, after the event, of a gathering of ‘a few people’ at the dunes, be he was not aware that this was a commercial enterprise taking place within an SAC.

‘This is shocking. I was totally unaware that this was a ‘pay to enter’ gathering,’ Deputy O’Sullivan said. 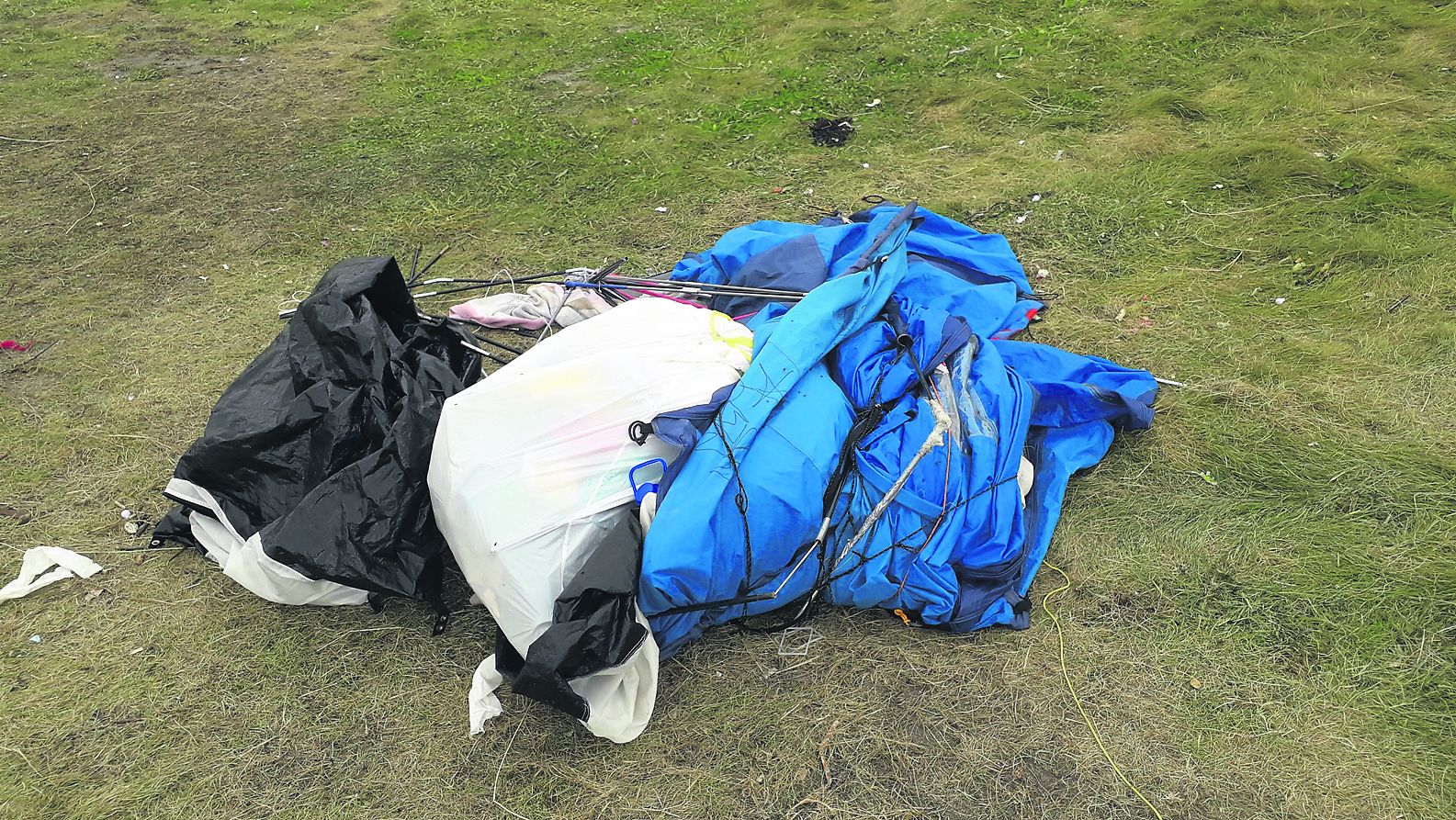 Some of the rubbish left behind.

‘This is an area of environmental importance and I see from social media that they had fires and fire dancing, where you can clearly see one of them dropping the flaming torch onto the bone dry grass,’ he said.

‘The NPWS, Cork County Council and the gardaí need to step up and take action on illegal camping in all its forms,’ he added. ‘Covid compliance and litter laws need to be enforced and we have to ensure that the habitat and the environment is protected. There are a lot of people out there in our communities who are working hard to protect and enhance our environment and this illegal activity is just a slap in their faces for all their work.’

The Long Strand event comes as areas have seen an upsurge in ‘wild camping’ right across West Cork with many locals and visitors complaining about litter, fire damage and some anti-social behaviour taking place.

Another SAC is Lough Hyne, where instances of illegal overnight camping and campervans has been reported. ‘I have seen first-hand the rubbish left behind by these campers,’ Deputy Michael Collins said, referring to the widespread use of illegal camping sites this summer.

‘We are asking people to holiday at home and we, of course, welcome them to West Cork, but we need to enforce the anti-litter laws and deal with any other illegal activities.’

‘This is a major frustration and disappointment for the communities and the volunteers who work so hard to make West Cork what it is. There needs to be more enforcement of the law,’ the Mizen deputy commented. 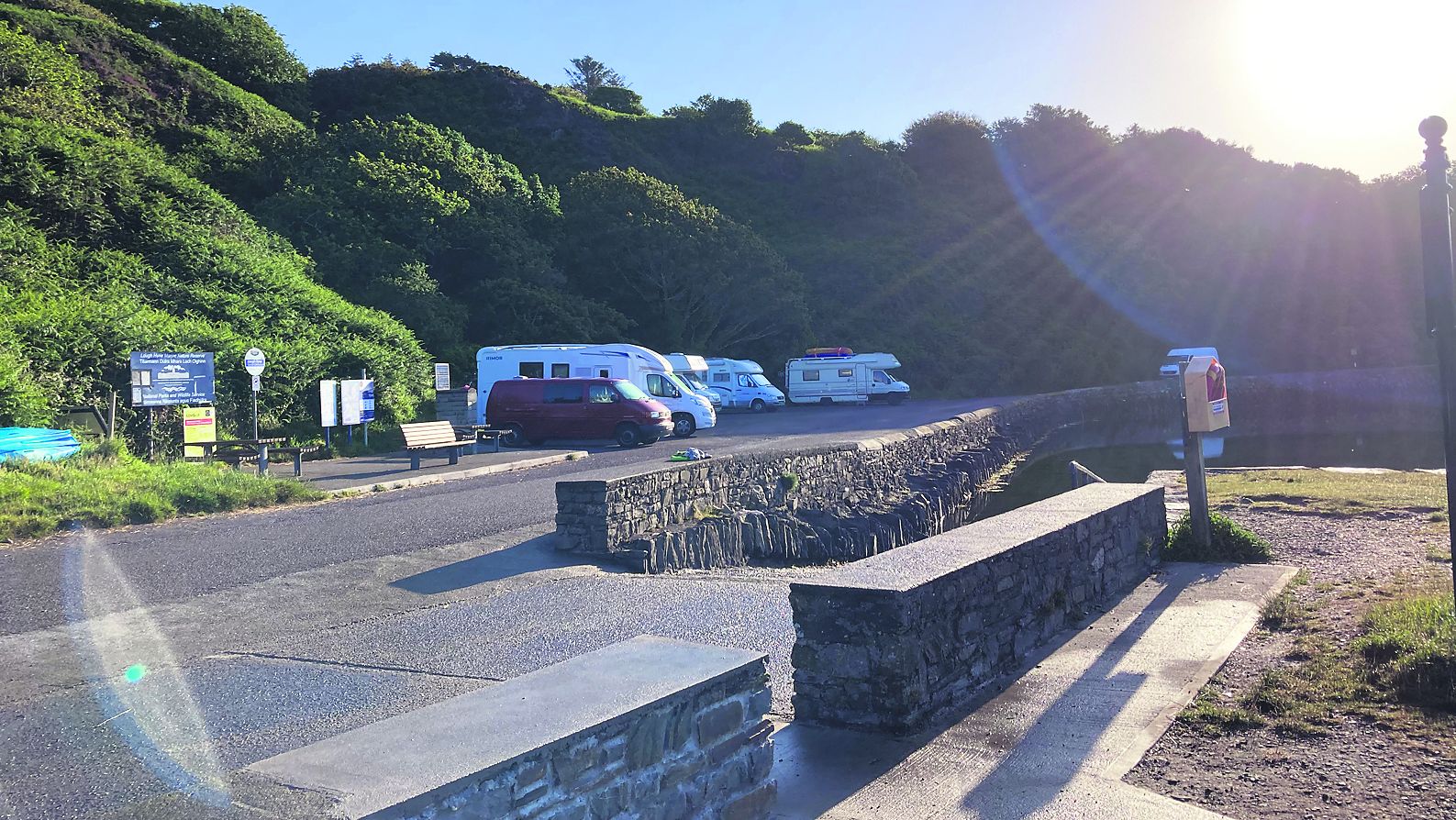 Campervans have been a familiar sight at another conservation area, in Lough Hyne.

Deputy Holly Cairns (SD) also called on the laws to be enforced and said: ‘In many cases, it is local volunteers who are cleaning up beaches including incredibly dedicated communities in Owenahincha, Long Strand, Schull, and all over West Cork. The reality of the matter is we need both better facilities and greater enforcement,’ she said.

‘We need to have a conversation about how campers and camper vans can be responsibly accommodated, and it is baffling that the Council executive still opposes having more bins and recycling points. I have been continually raising the need for more resources for the NPWS and for an increase in prosecution for wildlife crimes.

‘In the next few years, Ireland is planning to considerably expand our protected natural area network, but this will be in name only, unless the proper investment is put into enforcement.’

‘Cork County Council were not aware of the event taking place,’ the statement added. ‘The Council wants to encourage as many visitors to Cork county as possible, while also being aware that there may be limitations in the quantity and types of accommodation available to supply those who wish to holiday in Cork.

‘Cork County Council is aware that in some cases the regulation of holidaying activity may not be appropriate to the current practices and demands. Cork County Council will continue to monitor the demand that develops over the holiday season, including what was traditionally termed the shoulder season, and encourages everyone to respect the environments in which they are holidaying, fellow holidaymakers and the local people with whom they are sharing facilities.’