By Siobhan Cronin THERE is a 'severe crisis' among West Cork's mussel producers, according to the Irish Shellfish Association. Calling on the Minister for support for the industry, producers said the sector in both West Cork and Kerry has suffered highly unusual algal blooms this winter. 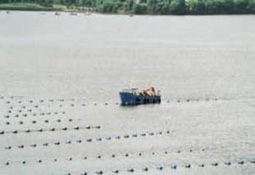 There is currently a ‘severe crisis’ among West Cork’s mussel producers.

THERE is a ‘severe crisis’ among West Cork’s mussel producers, according to the Irish Shellfish Association.

Calling on the Minister for support for the industry, producers said the sector in both West Cork and Kerry has suffered highly unusual algal blooms this winter.

The IFA’s analysis shows that up to 10,000 tonnes of top quality mussel crop have been lost to the elements or are now unusable.

‘Some bays have been forced to close down for five consecutive months and farmers have had to watch their crops wash away during the winter storms, instead of fetching premiums in top supermarkets and restaurants,’ the Association says.

Ireland South MEP Deirdre Clune has submitted a parliamentary question to the European Commission this week on the possibility of aid for shellfish famers in West Cork and Kerry.

IFA’s aquaculture executive Richie Flynn said that by closing their harvesting operations, the mussel farmers ensured that consumer and food safety comes first. ‘But unfortunately they have no control over the length of time these natural blooms can persist in the ocean.

‘Producers are not arguing with the science or criteria which closed them down. In fact, IFA members work very closely with the agencies such as the Food Safety Authority, Marine Institute, HSE and BIM to ensure we have the safest shellfish system in the world,’ he said.

But he called on Minister Coveney to encourage the EU to find a scheme to help the dozens of small family businesses along the south west coast to stay in business.

Mr Flynn said that crops should have been sold in November, December and even January.

But some bays have been closed continuously since mid-2014 due to the algal blooms, which should have disappeared by now.

‘Even if the bays were opened in the morning, prices have entered the annual cyclical slump and most of the crop has lost its quality appearance and size as it prepares for the spring spawning season,’ he said.

In her question to the Commission, Deirdre Clune said the shellfish industry was ‘very measured’ in its reaction and had not sought to dispute why the closures of some bays were necessary on public health grounds.

Irish Shellfish Association chairman Jerry Gallagher said he was appealing to Minister Coveney to find a financial solution to the problem, as allowed under the EU Fisheries Fund rules. ‘This is the Minister’s chance to make a real difference and keep open a successful indigenous industry in an important economic blackspot,’ he said.

Deirdre Clune added that the industry is supporting ‘the economic viability of many remote, rural and coastal communities in West Cork and Kerry’, and that she would shortly be discussing the matter with Minister Coveney.