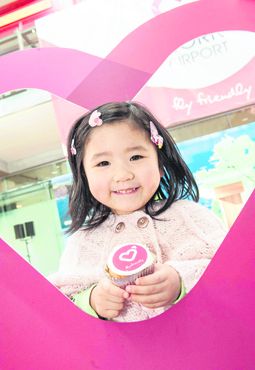 IN the face of a lot of negative publicity in recent months regarding its future, Cork Airport this week unveiled its new logo and brand identity.

Falling passenger numbers and crippling debt have led to a number of public campaigns to secure the future of the strategic airlink between the south coast and Europe.

But this week the airport said its new brand identity ‘underlines the importance of differentiating what makes Cork Airport unique – its network of routes, its award-winning customer services and its position as the gateway to the south of Ireland.’

At the launch of the new brand, airport MD Niall MacCarthy said the new look ‘really represents the first class, modern terminal that we have here at Cork, along with capturing the unbeatable passenger experience that we offer every day.’

He added that management ‘felt it was time we had a brand identity that reflected this unique experience and personality’. Describing Cork as ‘Munster’s favourite airport’ he added that the new look follows a number of recent announcements, like the addition of two new airlines and three new routes from Cork Airport.

‘FlyBe and CSA Czech Airlines both announced that they will be operating new routes out of the airport in the past two weeks,’ he said.

The launch of the new Cork Airport identity follows a number of months of research and development. Kevin Cullinane, head of communications at the airport said: ‘We wanted to ensure that our staff and passengers were involved in the evolution of the new brand, ensuring it reflects all that makes Cork Airport unique. We are delighted that there is so much enthusiasm and support for the airport and we are not surprised at the level of pride in Munster’s favourite airport.’