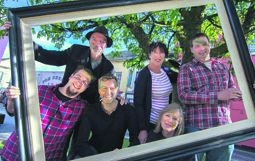 CLONAKILTY is getting ready to unveil its first Arts festival.

Plans for the Clonakilty Organic Arts Festival were first mooted nearly ten months ago, when members of the Tadhg an Astna Players and the Clonakilty Arts Centre formed a committee.

They have since produced an exciting, eclectic, and unique programme of events that will grace the town from June 18th to the 21st.

The festival is built around the rich talents sourced in the town and its local environs, hence the ‘organic’ word in the title. ‘We thought about how much talent is within the town and so many people in the region are unaware of this. So we decided that our mission statement from the beginning was to provide a creative space and stage for local talent,’ said Kieran Doyle, one of the organisers. ‘It was easy to get people to agree to do it because Clonakilty has so much talent and people are proud of what they can do.’

The festival will open on the Thursday night in De Barras with a taste of poetry, drama and singing, featuring acts such as the singing talents from Clonakilty Lodge. The official opening will be performed by Clonakilty man and poet Dave Lordan.

Highlights will include poetry, drama, music, choirs, and film, dancing in Emmet Square, street performances, history talks, comedy, and workshops. There is even a special treat for the smallies, as Tracey Lombard presents The Three Little Pigs, playing out across mystery locations around the town. The only way to find it is via the Choo-Choo train!

‘The local venues have been great in giving us space for the performers and we have tried to spread the performances around the town as best we can, including a dramatic pageant in Inchydoney’s amphitheatre,’ said Greg Mulcahy. Most of the events are free and the programme will range from morning to late, over Friday, Saturday and Sunday as well as the opening Thursday evening. The festival is being run on a shoestring and any money received is being used for promotional purposes. The performers have all wavered any expenses, but the organisers stress they would still welcome any donations or offers of sponsorship. For more, see Clonakilty Organic Arts festival on Facebook and www.clonartsfest.weebly.com