By Louise Roseingrave INTERNATIONALLY acclaimed novelist David Mitchell has teamed up with a west Cork artist to create a limited edition pendant in aid of Autism Ireland. 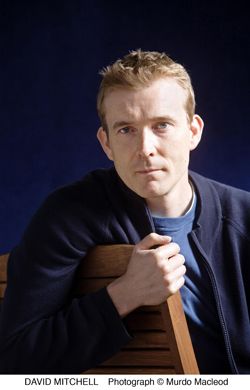 David Mitchell author of Cloud Atlas and listed for the 2006 Man Booker prize before speaking at the Edinburgh International Book Festival 2006.

INTERNATIONALLY acclaimed novelist David Mitchell has teamed up with a west Cork artist to create a limited edition pendant in aid of Autism Ireland.

The bestselling writer, who wrote the novel Cloud Atlas, lives in West Cork with his wife and two children – one of whom has autism.

Mitchell first commissioned Holland to create a piece of jewellery that featured in silver embossed format on the front of his latest bestseller, The Bone Clocks, which was long listed for the 2014 Booker prize.

The pendant is a replica of the mysterious labyrinth presented to The Bone Clocks’ main character Holly Sykes by her brother Jacko, before her life is thrown into turmoil.

Holland teaches her craft from her Clonakilty workshop, home of Kathleen Holland Designs.

‘I have some friends locally who study jewellery-making with Kathleen, so I knew that my strange commission wouldn’t faze her,’ Mitchell said.

Holland has completed 500 of the limited edition, sterling silver, ethically-produced pendants, exact replicas of Jacko’s labyrinth in the novel. A percentage of the €70 sale price is being donated to Autism Ireland.

In the novel, Holly, who runs away from home in 1984, eventually settles sixty years later on the Sheep’s Head peninsula. Through the story, Mitchell brings another Irish gem to the world audience in the form of the Irish mammy.

‘My main character, has an Irish mum, or rather “mam”. I wouldn’t have dared write such a character had I not met a few Irish mams myself over the last few years. Also, the final ninety pages of the book is set on the Sheep’s Head Peninsula over one weekend in the 2040s. Again, if I wasn’t privileged enough to live here and had the chance to get a feel for the landscape, its seasons and its history, I would have chosen a different location,’ he said.

Mitchell, originally from the UK, made West Cork his home after living in England, Italy and Japan.

‘There are places in the world as beautiful as West Cork, but when the sun’s out, nowhere in the world is more beautiful,’ he said. Pendants can be purchased online at kathleenhollanddesigns.com