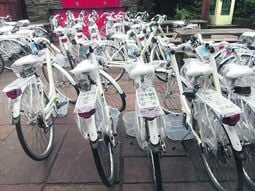 The Clóna Clonakilty bikes ready for distribution to the 11 docking stations around the area, earlier this week

CLONAKILTY is a town of firsts and now it has become the first town in Ireland to have its own bike hire scheme, which is set to prove very popular with both locals and visitors alike.

The official launch took place at Recorders Alley and co-incided with the launch of the Clonakilty Bicycle Festival and International Bike Day.

Launching the scheme, Mayor of Clonakilty, Cionnaith O’ Suilleabháin, said it was a great initiative for the town, and praised the voluntary effort of those involved in organising it.

‘Once again Clonakilty is leading the way and we are the first town in Ireland to have a bike rental scheme and this can only be good news for the town and it also provides great publicity too for Clonakilty,’ said Cionnaith.

Once the ribbon was cut on the bike shed, Cionnaith and Tom O’Donovan of O’Donovan’s Hotel saddled up on the new Clóna-sponsored bikes to cycle around the town, followed by more enthusiastic cyclists.

Initially, 60 bikes will be made available in 11 locations throughout the town and nearby villages, and these participating premises will have docking stations where the bikes can be picked up or dropped off.

Customers to the new bike scheme will also receive a special high vis jacket, helmet and an information booklet detailing the cycle routes in the locality.

The bikes come equipped with carrier baskets, gears, lights and are designed to appeal to both locals and visitors alike. The bikes will be made available through a yearly membership, at €20 for locals, and at €10 for tourists and visitors.