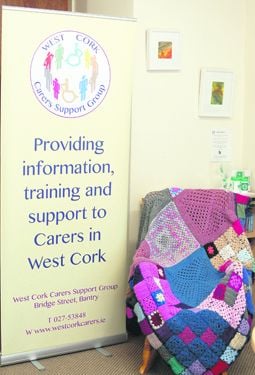 The stunning quilt which was raffled at the end of Carers’ Week.

FAMILY carers in West Cork recently unveiled a beautiful patchwork quilt which was the result of a unique collaboration between members of the group.

As part of National Carers’ Week, the group held a raffle for the beautiful creation, which was made under the guidance of a local crafts facilitator.

The West Cork Carers Support Group celebrated the week with a number of events to recognise and raise awareness of the fantastic work they are doing in the local community. The group was established in 1998 to give carers in the West Cork area an opportunity to meet, share information and receive support. It now provides regular supports to over 550 carers.

‘This was a great opportunity for carers to come together, support one another and share ideas and information,’ said Sally-ann Back, co-ordinator of the group. ‘We were delighted to see that Carers’ Week helped more people to identify themselves as carers and to become more aware of the supports they can receive and deserve. But the week is not just about raising awareness, it is also a time for celebration, recognition and fun,’ said Sally-ann.

The week of celebrations began in early June with a morning of relaxation and meditation at the renowned Dzogchen Beara Retreat Centre.

On the Tuesday, carers, their family members and friends, were invited to Clonakilty Cinema for a special viewing of the smash hit movie musical, ‘Mamma Mia’.

The special Sing-Along edition had the lyrics to every song on the screen, so the carers sang along to familiar favourites like Dancing Queen, SOS, Money, Money, Money, and many more.

A carers’ pamper morning in the Maritime Hotel in Bantry took place on Thursday giving participants the opportunity to relax and be pampered for a morning followed by lunch.

The quilt raffle took place the following Monday and winner Mary Coakley was delighted with her prize.