AN introductory drive in a new car is something like a first date.

Everybody is anxious to please and positives are to the fore. It’s only with later experience that any annoyances appear, and then those involved have to balance the good and the less good and decide on the relationship’s future, if any.

So it was with the Ford Mustang Mach-E I spent some quality time in recently.

My first date with the car before Christmas had been short, and made a really good impression. But now the rose tint was fading by spring.

The Mustang Mach-E is a car of absolutes. I absolutely love so many aspects of it. And there are a couple that could absolutely drive me away from any permanent relationship.

The gamble the company took by producing a crossover under the theme of its famous pony car has worked.

And worked well — Mustang Mach-E looks stunning, especially in the red of the review car.

That smartly designed roofline and rear spoiler leaves ample space in the back for three adults, yet the visual take is of a sleek coupé.

The triple vertical-slash tail-light sets echo the tradition of the ‘stang sports car, and the galloping pony motif in black with silver outline gives the Mach-E its own distinctive Mustang identity.

How important the carmaker considers that identity is demonstrated by the fact that the name ‘Ford’ or any blue oval badge does not appear anywhere on the car.

Inside there is ample room for all aboard.

The styling is basically clean and smart, with Ford’s traditional clear and unambiguous labelling of controls and switches.

The top of the dashboard is a full-width soundbar, providing a rollicking audio quality for whatever is your road trip music preference.

The gear selector — albeit there are no gears — is that rotary knob we’re familiar with from other Ford automatics.

There’s nice red double stitching on all the leatherwork edgings, reminding the owner they are driving a sporting heritage.

The main instruments, digital of course, are in a simple rectangular space with everything easily visible. The view to the front has the double-ridged bonnet, another reflection of Mustang styling.

The elephant in the room is in no way invisible, though.

It is massive and dominant. It looks tacked on. It is primarily black lettering on white background, not something I care for at all in a car’s infotainment setup.

The only redeeming feature in the thing is a really big volume knob at the bottom of the screen.

Apart from the size — I have wondered before is it Ford simply trying to out-Tesla in this feature? — navigating the various functions on this screen proved to be a week-long nightmare.

One not to be attempted while actually driving. Bluntly, it is extraordinary that Ford engineers have produced this monstrosity when their SYNC infotainment-connectivity systems up to now have been exemplars for every other carmaker.

Small example: it took me half an hour to find out how to change the speedometer units from MPH to Km/hr ... and then only after I Googled the issue from my phone, having finally given up on the digital in-screen instruction manual.

Now that I think of it, pretty well all my issues with the Mustang Mach-E are related to that screen and managing the settings in it, including things that may need to be changed as you drive. It is monumentally distracting for eyes that need to be on the road. It is horrible. 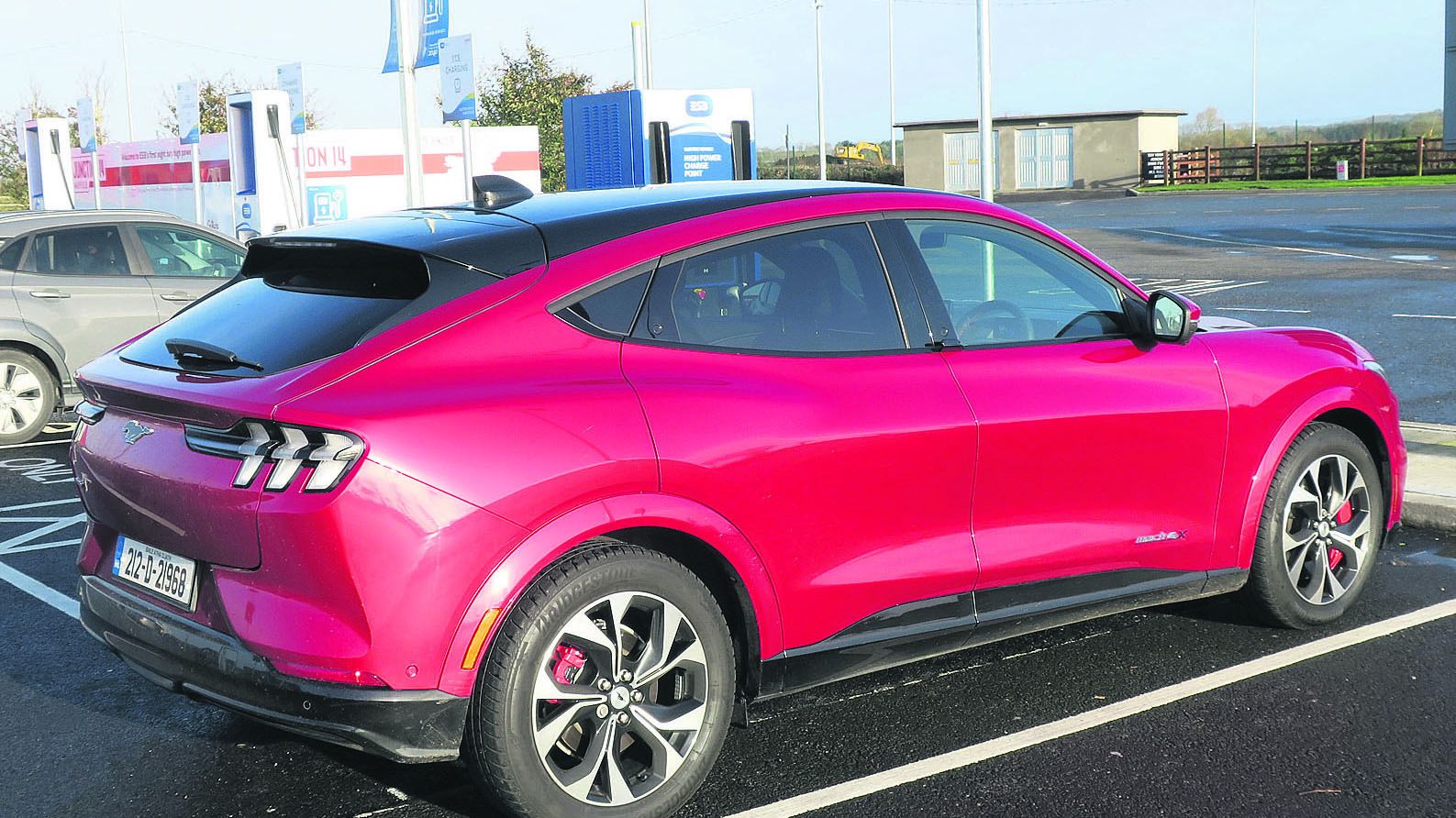 For the rest, the car performed beautifully. Good suspension settings eliminated any sense of the it being much heavier because of the big battery.

Indeed, it felt very nimble in a range of driving. Charging it at my local Circle K proved peachy easy, as did my topping up overnight from a 13A external socket at home.

The review car’s range worked out at a realistic 350kms, established by a lot of to-ing and fro-ing around my home county because part of my family was re-emigrating and there were lots of associated things and events. There are larger batteries available.

The silence of the car was blissful. There’s an artificial ‘growl’ available in the ‘Untamed’ driving mode, which I tried once and then didn’t bother with any more.

You can enjoy a Mustang in silence, though the owner of a GT V8 made it his business to remind me of the old sound as he revved it out of a supermarket car park after a chat.

So, are me and Mustang Mach-E ready to go back to the reality TV dating show and say we’re still in a good relationship?

Well, nothing is perfect, and it’s still in the balance. But we’re still talking.

What I like: That I didn’t actually chuck that screen out the window.