IF all the Volkswagen ID numbers are somewhat confusing to you, you’re probably not alone.

Quick primer: all IDs are electric; ID.3 is a compact family hatchback; ID.4 an SUV in the same C-segment; ID.5 a coupe version of that last; and ID.Buzz is the van-based passenger MPV and commercial vehicle. There’s an ID.6 in China, a 7-seater in the D-segment; and planned for this year are a city car ID.1, a small ID.2 crossover, and large saloon and estate ID.7s.

So, what you see is Volkswagen’s roadmap to offering a range of EVs to match most of its current internal combustion models. Nothing in the pickup to match the upcoming new generation Amorak yet, but given the cooperation agreement with Ford on LCVs and future blue oval passenger EVs, doubtless there will be a VW variant of Ford’s US F-150 Lightning at some stage. 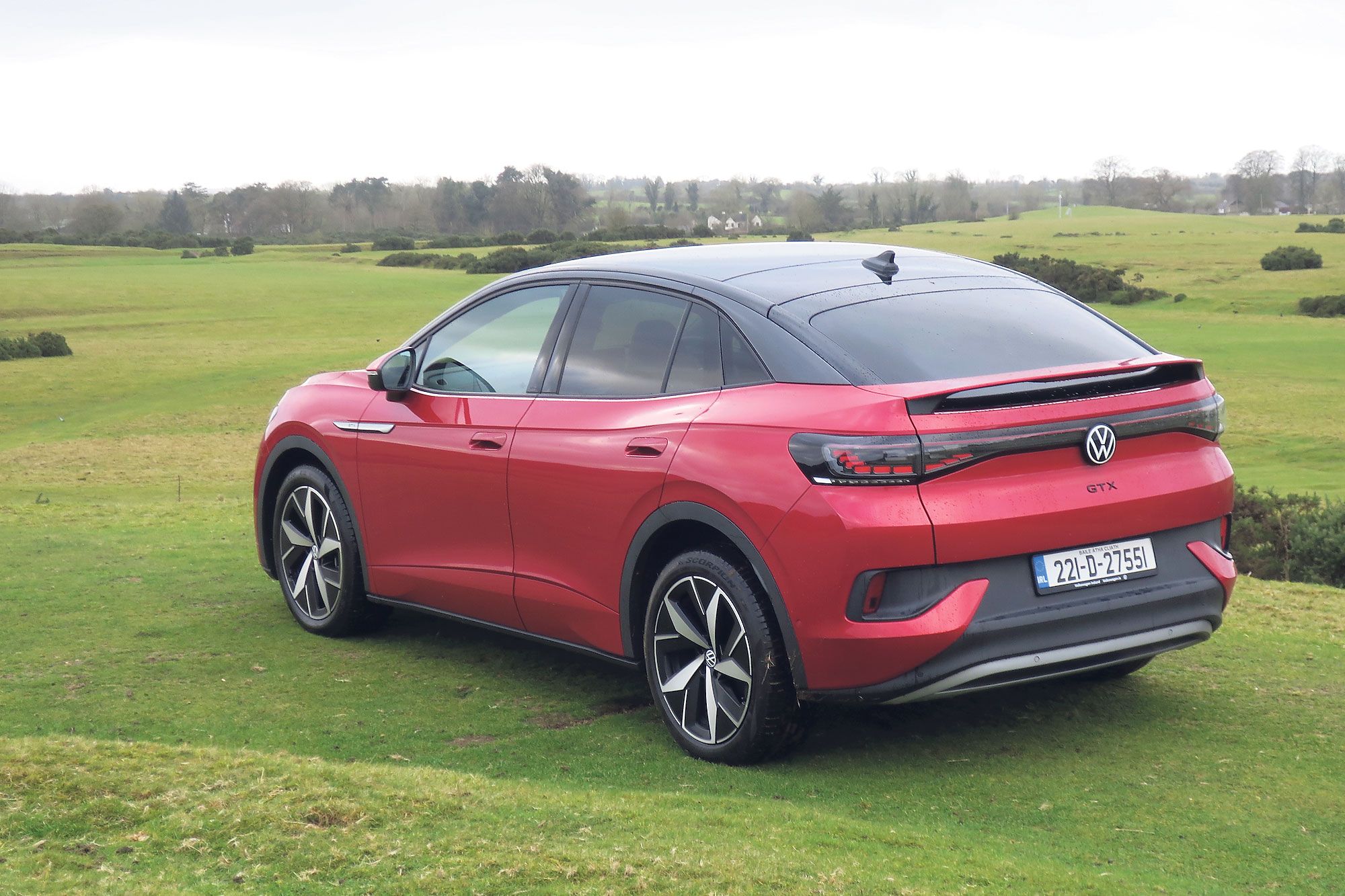 All of which brings me to the ID.5 which is the subject for my review this week. The style is slick, recognisably an ID, but with that more gently sloped rear roofline which highlights it as a coupe. It looks well, and VW’s treatment of fronts for its electric cars manages to avoid the  blankness which still seems odd to those of us so used to decades of functional radiator grilles.

Some clean sculpting, and a lighted trim strip linking both headlight clusters does the trick nicely. The profile has a good mix of curved character lines that, along with contrasting roof colour, provides a sleek rather than the bulkiness look of your typical SUV.

The rear features an integrated spoiler on the tailgate that lines up well with the flanks of the car, and some clever  detail shapes and bodywork colour contrasts.

Inside, the primary sense is of good space but where the occupants are also cosseted in quality modern materials. The review car was the top of the line GTX Max version, so there are additional subtle red details to remind that this one is something more than usual.

The instrumentation is exactly out of all the other ID cars — the small driver’s screen with basic driving and range information, the integrated twist-switch for drive selection which some ergonomics apprentice decided should be hidden by the steering wheel. A pity too about the lack of proper knobs for climate and volume controls, but the central touch-screen is relatively uncomplicated. 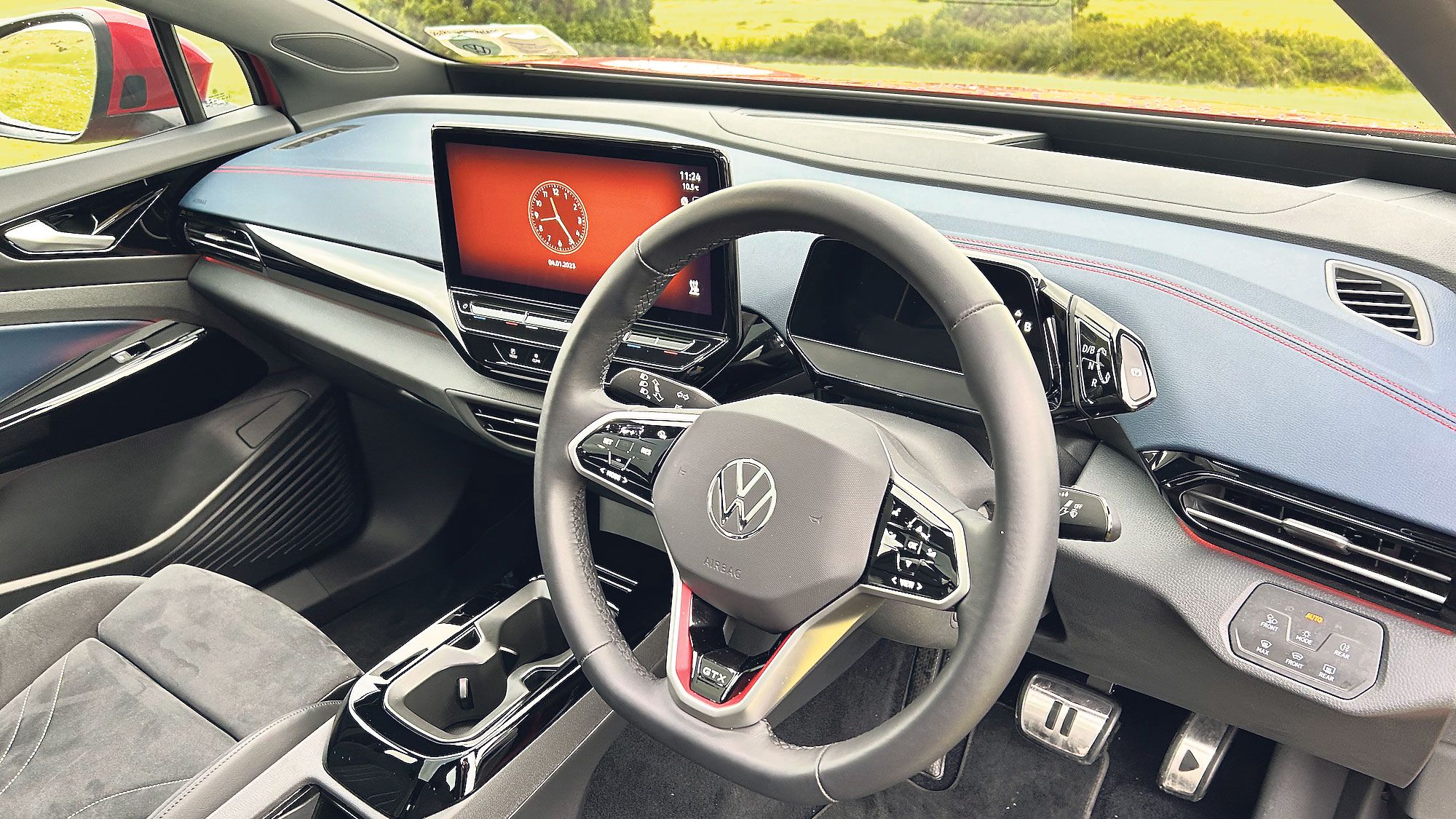 I’ve mentioned the roominess sense, and that’s borne out by the actual space for occupants, which is very decent. The coupe rear doesn’t really impinge on headroom for those in the back seat, but it does mean that cargo capacity is a little less. The shape also makes the ID.5 more slippy through the air, though, which is a bonus when it comes to making the most of the battery range.

That battery is a 77kWh one which is standard across the ID.5 range. It powers different performance levels, though, depending on grade. For the GTX, there’s an extra motor which gives all-wheel-drive. The acceleration is also quite blistering at 6.3s-100km/h compared to the 8.4s of the entry version — a power output of 299PS compared to the 170PS of the other will do that. The range is rated officially at 497km, but driving location, style and conditions will significantly affect that.

On the road, whether taking advantage of the extra power or simply doing the normal thing, the ID.5 remains smooth and silent, as those of us driving electric cars a lot have become quite used to. It’s 2.2 tonnes of car but doesn’t show its weight, with the adaptive chassis control of the review car doing road surface management even more effectively.

In Volkswagen’s car sales here last year, the ID.4 on which my review car is based was the brand’s top seller, by the proverbial country mile and representing a quarter of all VW cars registered.

Given my most recent experience via the ID.5, I’m not surprised.

Space in a smooth motoring machine.