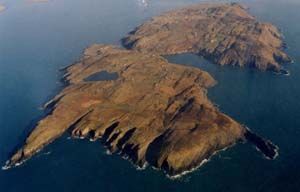 CAPE Clear could once again be facing a water crisis this summer, as it was confirmed this week that no progress has been made on the Capital Water Schemes since last year.

At a Western Committee meeting this week, Cllr Joe Carroll raised the question if islanders would face another summer season of water problems.

‘The people on Cape Clear have been experiencing water problems for the last couple of years now and last summer we had the situation that Cork County Council had to bring in a water tanker to deal with the water shortages,’ said Cllr Carroll.

‘It seems the islanders will go through the same thing again this year and it’s a case of no good news for them since Irish Water took over operations.’

The problems with water on the island began near the August Bank Holiday Weekend last year when the dry weather, coupled with the high demand for water, meant that Cork County Council had to bring in a water tanker to cope with the demand.

David Keane, county engineer and director of water services with Cork County Council said the same problems might occur as nothing has been advanced since last year.

The Project Review Report for the provision of a new water source, treatment and storage for the island, has been completed and submitted to Irish Water and Cork County Council are awaiting a response from them.

Plans for a restructuring of the network main are also at a design stage.

A spokesperson for Irish Water said that the company is due to meet the residents of Cape Clear during the first week of June to update them on the scope of works proposed for the Cape Clear Water Supply Scheme and members of the public are welcome to attend the briefing.

Cllr Carroll plans to raise the issue of the lack of progress with the Cape Clear project at the monthly clinic meetings that councillors have with representatives of Irish Water.

‘These clinics were put in place so that we, as councillors, could meet and talk to Irish Water representatives. Sometimes they give us answer and sometimes they don’t, but I will be asking them if Cape Clear is a priority.’

Cllr Rachel McCarthy raised the point that some of the answers she has received from the Irish Water clinics were very inadequate.

‘The service is fine and they meet us, but the response I got from them on one particular query was wishy-washy and I couldn’t go back to my constituent with that answer, and that’s the level of responses we are getting from them,’ said Cllr McCarthy.

‘We don’t expect answers straight away, but I waited weeks for one answer which I couldn’t give back to constituents,’ she said.