Brian McCarthy, left, with Andrew Rae from sponsors Simply Suits. who fitted him out with a suit for the event 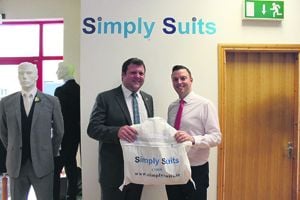 Brian McCarthy, left, with Andrew Rae from sponsors Simply Suits. who fitted him out with a suit for the event

A CAHERAGH man is flying the Cork flag among the escorts at this year’s Rose of Tralee festival.

Brian McCarthy, who now works as an auctioneer in Dublin, is the only Cork man who will escort a Rose at the festival in Kerry, which runs from Friday August 14th – 18th.

Brian applied to be an escort when a friend suggested he should do it after returning home from Australia. ‘I was living in Australia in 2008 and 2009 with a friend of mine. I’ve always wanted to enter it, so when I came home that same friend suggested I should do it. I thought I’d be too old, but I made the age limit by a month,’ he said.

The age limit for an escort at the Rose of Tralee is 31. After passing that hurdle, Brian went through a series of call backs and interviews as the judges narrowed down a list of over 200 applicants.

To his delight, he was invited back for boot camp, where the escorts get to know each other and learn what is expected of them at the festival.

There is a prize for ‘Escort of the Year’, which the Roses get to vote on, but it’s not the most important thing, Brian explained. The role of an escort is mainly a support role. They make sure their Rose is enjoying herself and act as timekeepers.

Looking ahead to the experience, Brian says he expects to meet a lot of new people. ‘Like at boot camp, they’re a great bunch of lads. It’s a big family at the Rose of Tralee,’ he said. Brian also took the opportunity to thank his sponsors – Cork Marquee Company, Simply Suits, and Sober Lane in Cork.