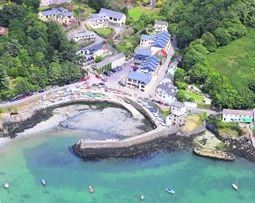 DETAILS of the 2015 CH Marine Glandore Classic Regatta were announced at a press launch in the Cork HQ of Heineken Ireland recently.

The regatta will take place from July 18th to 24th, and the impressive Parade of Sail will take place on the Sunday, with competitive racing during the week. The very popular ‘Music in the Street’ gig also takes place on Sunday evening and Bill Sandberg (USA) will return as principal race officer.

The Baltimore/Fastnet cruise and Castletownshend race will also take place during the week.

This year there will be a special welcome for gaff rigged boats, with members of the Old Gaffers Association attending Glandore Classic Regatta as part of their cruise along the West Cork coast. There will also be oar and sail events.

Nicholas Bendon of CH Marine spoke on behalf of the sponsors saying that they were very happy to be associated with the continued success of the event.

For more details and a schedule, see glandoreyc.com