Padraig Pearse delivers the graveside oration for O'Donovan Rossa in Glasnevin on August 1st, 1915. Sinn Fein have organised an event in Dublin for the anniversary. 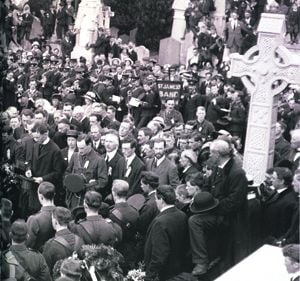 Padraig Pearse delivers the graveside oration for O’Donovan Rossa in Glasnevin on August 1st, 1915. Sinn Fein have organised an event in Dublin for the anniversary.

MEMBERS of the public are being asked to walk in the footsteps of the leaders of 1916 in a very special tribute to West Cork patriot O’Donovan Rossa on August 1st, which is being filmed by the BBC.

Given how intertwined the names of Jeremiah O’Donovan Rossa and Skibbereen are with each other, you’d be forgiven for thinking that this was the only part of the country to honour O’Donovan Rossa on his centenary.

However, the capital is paying tribute to the great patriot as well, with a re-enactment of his funeral due to take place on Saturday, August 1st in Dublin.

The event, organised by Sinn Fein, will be a ‘full scale reenactment’ of the historic O’Donovan Rossa funeral cortege through the streets of Dublin that took place in 1915.

The procession will follow the original route from City Hall to Glasnevin cemetery and will conclude with a re-enactment of Padraig Pearse’s famous graveside oration.

The cortege will feature a horse-drawn hearse, marching bands, uniformed Irish volunteer cavalry, and a 40-strong uniformed guard of honour provided by the Cabra Historical Society.

The funeral of O’Donovan Rossa has been described as a call to arms for the 1916 rising and as such, the public are encouraged to participate in the event by joining the procession and wearing period dress.

‘We want to give the people a chance to participate in commemorative events and the O’Donovan Rossa re-enactment is the first event of Sinn Féin’s centenary programme,’ said Bartle D’Arcy, Sinn Féin’s 1916 national co-ordinator. ‘There is huge interest in 1916 now, the BBC are covering our re-enactment of this funeral which was the ‘Call to Arms’ for 1916.

More locally, Skibbereen has been busy with O’Donovan Rossa-themed activities, and there are more to come. On July 20th and 21st, two performances of the acclaimed play Rossa were performed in the Town Hall (see Life & Community secton) and on Tuesday of this week, a historical walking tour of sites associated with the Fenian hero took place in the town.

Rossa, the play, will also be performed in Rossmore, near Clonakilty, this weekend.

On Sunday 26th, there will be a Comhaltas Ceoltóirí Éireann concert of patriotic ballads and poetry, and on the following Tuesday, the West Cork Hotel will host an Irish language of talk, poetry and song in honour of O’Donovan Rossa.