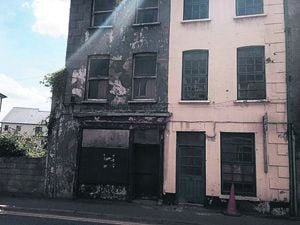 A BANDON businessman who says he is passionate about his town, is asking Cork County Council to address the run-down state of one of the town’s main streets.

Guesthouse owner Mark Piper has criticised what he calls the deteriorating state of some buildings on North Main Street, in particular.

Mark, who runs the Laurel Guest House, says that the state of the street has been commented on many times, so he’s not saying anything new.

‘I want Bandon to look its best as it’s the gateway to West Cork, and some of the buildings on North Main Street leave a lot to be desired,’ he said.

‘Guests who have stayed with me have commented on the state of these buildings. All the owners of the buildings need to do is to give them a lick of paint,’ he said, referring to the street that is on the main route from Bandon to Bantry.

And he added that if someone offered him some paint, he would volunteer to paint them myself. ‘I am also asking if Cork County Council have any remit to force the landlords of these buildings to fix them up. All it takes is a small bit of work to spruce them up,’ he suggested.

Mark is keen to point out that Bandon is a fantastic town with community groups like Bandon Tidy Towns Committee undertaking great work to make the town look presentable, and the town has plenty to offer tourists.

‘We have fantastic restaurants here and a great heritage tradition too, and the likes of the Graham Norton Walkway along the River Bandon, is excellent – as is the skateboard park.

‘There is a great spirit in the town and I would like visitors to get a lovely visual feel from the town, too.’

However, Mark feels that the abolition of Town Councils last year has had a detrimental effect on the town as it was a place where people could air their concerns about the town to local councillors.

‘We have some new young councillors who are full of energy, but the abolition of the Town Council was definitely a setback. It would be a great idea if perhaps we could have a representative from the council on local radio once a month where people could contact them about legitimate concerns, not just for Bandon, but for the whole of West Cork.’

However, local Cllr Margaret Murphy O’Mahony said she was disappointed to hear that someone would be publicly negative about the town.

‘I received a lot of calls from people in Bandon about Mark’s criticism of Bandon and I’d rather people do something concrete than be negative about issues in the town,’ said Cllr Murphy O’Mahony.

‘In relation to North Main Street, and the buildings there, the Council are working on it and trying to establish the owners of them all. The main drainage scheme is of course holding things up, but there is a plan in place for post-drainage and flood relief that will see Bandon looking its best. But in the meantime, we must pull together and be proud of the town. No town is perfect, but the positives outweigh the negatives.’

Hilary O’Farrell of O’Farrells newsagents said that people need to be more positive about the town and that it has plenty going for it, despite suffering the devastating floods in 2009.

‘North Main Street is a very historical area, but the area does need funding to upgrade it,’ said Hilary.

Cork County Council held a public consultation in Bandon Town Hall in May for the Bandon Transportation and Public Realm Enhancement Plan (Bandon T-PREP). The vision for the plan is to create a vibrant town centre, encourage greater levels of walking and cycling and to improve ‘public realm shared space.’

A second public consultation takes place on November 27th where members of the public can make submissions.