Clare O'Leary and Mike O'Shea on their trip across Greenland 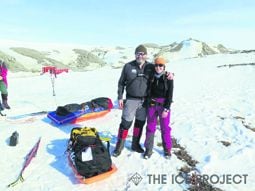 Clare O’Leary and Mike O’Shea on their challenging trip across Greenland which took them 24 days.

PUTTING football rivalries aside, a Cork woman and a Kerry man have become the first Irish team to cross the Greenland Ice-Cap using just skis and dogs.

It took Bandon native Dr Clare O’ Leary and Mike O’Shea from Co Kerry 24 days to complete the gruelling 570km trek and they recently arrived home from their tough expedition.

This was their sixth expedition in what they have dubbed ‘The Ice Project’ in which they will attempt to cross nine of the major ice caps of the world.

Mike is also well known for his adventurous feats, and the par set off with six others and three teams of dogs, under the guidance of European Dog Sledding champion, Sigrid Ekran from Norway.

The team initially travelled for seven days man-hauling the sleds before meeting Sigrid and the dogs, and made slow progress as they were hampered by deep snow and a series of storms.

Having to endure temperatures averaging -20 to -30 degrees, the team travelled between 10 and 16 hours per day and spent up to five hours melting snow and ice for water for both themselves and the dogs.

‘The romantic idea of dog sledding wore off pretty quickly, it certainly wasn’t a Disney moment, trying to coax the dogs forward, skiing around dog dropping and their wind just wasn’t part of the plan,’ said Mike O’Shea.

‘The weather overall was far more stormy for this time of year and the last two days tested both the dogs and us to our limit to escape the Pitteraq.’

The final 124km, which was 20% of the journey, was covered in 52 hours, as there was a Pitteraq, which is a cold and potentially devastating wind, forming off the coast.

The team travelled with just two breaks, totalling eight hours and struggled through 20 hours of deep snow and winds that blew snow horizontally.