By iln Quinlan THE gloom of a January afternoon shattered into a froth of tulle and a whisper of pink satin yesterday (Wednesday) as a flock of tutu-clad young ballerinas pirouetted into Skibbereen's spectacular new Arts Centre. 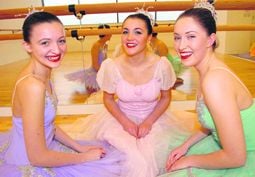 Students from the Alan Foley Academy of Dance were the first to make use of the new studio at the West Cork Arts Centre ‘Uillinn’ in Skibbereen on Wednesday. Pictured taking a break from lessons were Niamh O’Driscoll (Skibbereen), Sorcha Browning (Ballydehob) and Dearbhla Cullinane

THE gloom of a January afternoon shattered into a froth of tulle and a whisper of pink satin yesterday (Wednesday) as a flock of tutu-clad young ballerinas pirouetted into Skibbereen’s spectacular new Arts Centre.

The 100 or so dancers – all members of the Alan Foley Academy of Dance – were thrilled by their first sight of the state-of-the-art dance studio that awaited them in the five-storey, €3.6m centre named ‘Uillinn’.

Alan says the studio in Skibbereen rivals anything he has seen in New York or London.

‘This studio is specially designed for dance with a special sprung floor, beautiful floor-to-ceiling windows and full-length mirrors, as well as ballet barres – we have waited for this for many, many years,’ enthused Alan, principal of the academy and creative director of the Cork City Ballet, who has held classes in the old premises on North Street for two decades.

‘The children are ridiculously excited about it. Everything is new. It’s absolutely wonderful to have a facility of this kind in Skibbereen.

‘Our students in Bantry and Clonakilty will also avail of these facilities,’ said Mr Foley, who paid tribute to the staff and the board of management for what he described as the ‘many years of hard graft’ it took to bring the project to fruition.

Aside from 10 staff and two Community Employment scheme workers who transferred from the old building on Monday January 5, the youngsters, who range in age from two-and-a-half to 20, are the first members of the public to enjoy a class in the new West Cork Arts Centre in the centre of the town.

The centre annually holds about 10 large exhibitions, as well as up to three activities per day.

The inaugural exhibition will take place on January 31 at 3pm with the opening of an exhibition entitled ‘Fourth Space’, by nine artists.

The official opening will take place in early summer.

‘We would be hoping to hold many colourful events here into the future,’ said spokesperson Rita O’Driscoll.

‘The new arts space will provide a quality arts facility and a new social space for the community, enhanced workshop, dance, performance and film club facilities and improved exhibition space and studio spaces for artists.