Joe Hawes knows some of those in this photo but if you can identify anyone, email editor @southernstar.ie

A group of salesmen and women used to meet regularly in three hotels across Ireland in the 70s and 80s. One of those hotels was the West Cork in Skibbereen and a recently rediscovered picture tells the story of bygone times.

AN old photograph of ‘travelling reps’, taken in the late 70s in the foyer of the West Cork Hotel, tells the story of the strong bonds that formed between the men who were ‘out on the road’ in the days before mobile technology and the internet.

The photo was recently rediscovered by Joe Hawes who, at the time, was a ‘rep’ for Hawes Motor Factors.

‘This is no ordinary photo – it tells a big story,’ explained Joe. ‘The photo was taken around 1978 or 1979. I remember there was an ICA meeting or something on, and a newspaper man was taking photos. I asked him to take ours, gave him my details and he sent it on.’

Joe said the West Cork was known as one of three famous hotels in Ireland for ‘reps’ staying overnight, including Hayes Hotel in Thurles and Jacksons in Ballybofey, Co Donegal.

‘Of course the most famous of all was the West Cork Hotel in Skibbereen. We all knew Tuesday night was the big night in the West Cork and there could be up to 30 or 40 of us staying. There was every kind of a trade represented, from hardware to clothing reps, shoes, cigarettes, cigars, biscuits, electrical goods, children’s toys, batteries, glass, paint, fruit, wholesale groceries, cheese, farmers’ rations, drinks, timber and others – not forgetting the two ladies who also joined us from time to time – one was an ESB cookery demonstrator and the other was from the Department for Schools, I think it was called.’

He has very fond memories of the staff in those days at the hotel. ‘Noreen in the dining room remembered all the likes and dislikes of each one of us. How she remembered it all, I just don’t know. I never consulted a menu, she knew what I wanted and the portion size. Sheila did the breakfast (I think she is still there) and, like Noreen, knew what everyone needed. Catherine was in the reception area collecting the money with all the bills neatly laid out. There were never any mistakes and she was never in a rush. John from Castletownshend was in the bar and had all the room numbers. Great for the chat and very attentive to his job. Mrs Murphy was in the kitchen and only occasionally appeared. When the self-service breakfast came in, it took some time to catch on, but eventually we carried on as normal.’

Joe remembered the night would start with a full dinner in the hotel. ‘Then we would head out in Skibbereen with a visit to various watering holes, or we might leave town if there was something on nearby – particularly in the summertime.

‘Then all back to the hotel and into the bar and we’d sneak into the kitchen and make our own suppers. Unfortunately that came to a halt after a few guys got messy and boisterous. But it had gone on for years by that time!’

‘Then it was out with the cards, and a few more drinks for some, ‘til daybreak. We had a few good nights at the piano, especially when Mary Rose from the ESB was with us.’

Joe remembers the then-hotel proprietor, John Murphy, who sadly passed away this July, knew everything that went on. ‘He was brilliant, he would even know what you were thinking!’

He knew everyone and if you were a non-desirable you quickly ‘got the road’, said Joe.

‘John and his wife were very good to me. They looked after me like one of their own. If I was sick with a cold or touch of flu, there would be an extra blanket, an electric fire and ‘aspros’ in my room – they would even check on me last thing at night!

‘They gave me a nice present when I got married and visited my home in Cobh, one evening out of the blue. But the West Cork Hotel was my home-from-home. I stayed every second Tuesday night from 1974 to 2006 – so that’s around 1,600 nights, and about four years of my life!’

Joe’s son now runs the family firm Tadgh Hawes Motor Parts, and still has a rep staying at the hotel every week. ‘He is Ted Irwin, but he stays now on a Monday night. Ted was staying when I was there, he was working for Lucas Motor Parts but I bought the company in 2008.’

‘Some of the guys were very colourful,’ recalled Joe, ‘but then a ‘rep’ must have a personality, or he is lost before he starts! It’s that type of a job – you are depending on someone liking you to start a rapport, or you will not succeed in the job.’

‘I was the youngest and I remember I used to sit on my own in the dining room at the start and eventually the guys called me over to join them. They had very high opinions of themselves, of course, they had good jobs, nice clothes, nice cars.

‘And we often saw local ‘celebrities’ there – we’d chat to Jack Lynch often, who had a house nearby, and there were two regular bishops – Bishop Murphy and Bishop Buckley, and businessman Tony O’Reilly was there many times too.’

Joe says he made many friends in West Cork during those great years. ‘I knew many people in Skibbereen that had nothing to do with my business, but from seeing me so often, we became friendly. It was a fabulous time and it all came and went in a flash.’

Joe says some of the reps who stayed at the hotel in those days included: 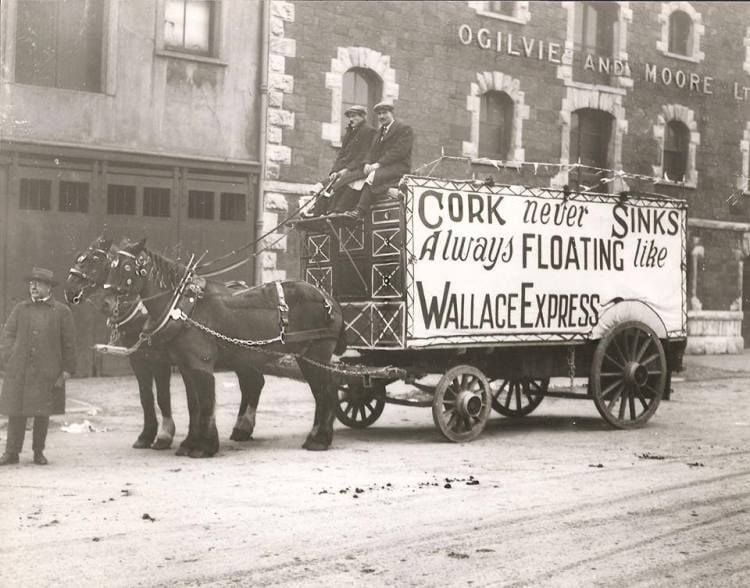