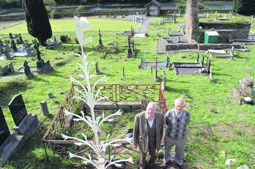 Noel O’Driscoll and Denny O’Sullivan from Skibbereen Historical Society at the Abbeystrewry graveyard with the angel back in her rightful place. (Photo: Anne Minihane)

AN administering angel, overlooking the dearly departed at Abbeystrewry cemetery, has returned.

The angel – an imposing wrought-iron sculpture that was created by JJ McCarthy of Skibbereen in 1847 – is actually dedicated to the memory of a 12-year old, who died during the Great Famine, but it overlooks and offers solace to the entire cemetery.

The 15ft angel, which is a local landmark, had to be removed from Abbeystrewry Cemetery – which in itself is a landmark, given the fact that it is one of the most notable famine burial plots in the country – after it was knocked over by the collapse of an old stone wall six years ago.

‘We are delighted that the 8ft wall, measuring 50 yards, has been sensitively restored because it, too, has its origins in the Great Famine,’ said Denis O’Sullivan. ‘It was worth the wait and it now serves as a beautiful backdrop to the angel, which was also in need of some restoration.’

The members of the Famine Commemoration Committee would welcome visitors to the cemetery to view the angel, which was restored to its rightful place on Thursday, May 28th last.

Denis O’Sullivan told The Southern Star: ‘We appreciate the work done by everyone involved in restoring the wall and the angel, and we also appreciate the help and support of Philip O’Regan, a much-respected local historian.’